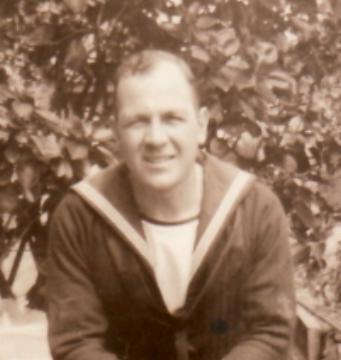 Leonard Herbert Thomas, my father, was born in Portsmouth in 1912 and when just 17 he was lucky enough to have his request accepted to join the RRS Discovery II to sail for the Antarctic. He did 5 voyages covering the next 10 years.

In February 1941 he joined the Royal Navy (as did most of his brothers) and he was drafted to HMS Mersey and served as greaser, then to HMS Princess Josephine Charlotte followed by HMS Mersey. In February 1942 he joined HMS Ulster Queen and sailed from Loch Ewe on PQ18 and subsequently QP15. He did other trips in the Atlantic and also sailed to Malta. He was then posted back to HMS Mersey and was finally discharged in April 1946.

After he retired in 1977 he started to write his memoirs from his childhood growing up in Portsmouth, his Antarctic memories and his WW2 experiences. I imagine he was no stranger to the cold when doing the Arctic convoy run to Russia but he candidly admits to fear when locked in the bowels of the ship and hearing explosions going off in battle.

He lived a full and happy life marrying the Irish girl he met before the war, and then settling down to live and work as an electrical engineer in Edinburgh where I was born and grew up. He was a talented artist and writer and enjoyed both as hobbies in his retirement. He passed away in April 2000 aged 88.