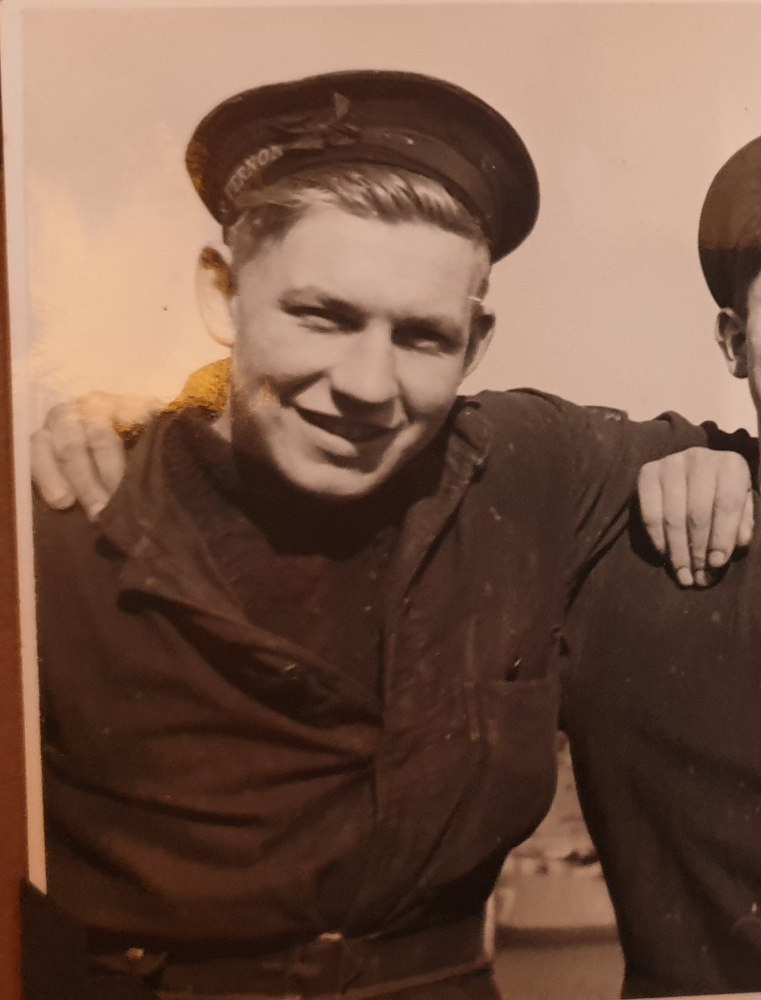 My Grandfather Leonard (Len) Jenner was born in August 1922 in Hastings and joined the Royal Navy at the start of the second world war. Sadly, he passed away in the early 1990’s while I was in my early teens and I imagine a lot of his stories were left untold.

After reading about the 75th anniversary of the Russian convoys and the work you are doing to get veterans to attend I thought that it would be interesting to see if any of his old ship mates were going to be attending. Either that or if they or their families had seen your website.

I have always been interested in what he did and the horrific conditions they all had to suffer and we have some photos which we have kept and often look at.

Grandad served on 4 ships as far as I can remember, they were HMS Whitesand Bay, HMS Ness, HMS Iron Duke and HMS Amazon. HMS Amazon being the ship which seemed to mean the most to him, after reading up online it is no wonder why. He was a leading seaman and worked within the electrical branch on torpedoes and depth charges.

One of the pictures I have sent is of some crew from U110, a U boat which was sunk by HMS Bulldog. He recalled playing cards with them and sharing a drink on the deck of HMS Amazon. An enigma machine and code-books were captured from U110.

He once recalled being sunk in Scapa Flow but the ship merely rested on the bottom in shallow water and everyone was OK. Whether this was true or was sanitised for my young ears I don’t know.

He was also involved in convoys to north Africa, visiting Algiers. I believe that this was during the time that he served aboard HMS Ness, visiting a place called Freetown ensuring the supplies for the campaign in Africa.

It always seemed to come back to HMS Amazon and the numerous, cold and hazardous trips to Murmansk and Archangel stopping off in Iceland on the way.

I recall a time that he attended Navy Days in Portsmouth, where I grew up. A Russian ship was in port and he went on board and spoke to some of the crew, he discussed his time in the convoys with them and was promptly taken to see a senior officer where they shared a drink of some sort and stories. They crew gave him a large ceremonial coin as a token of their thanks.

After living, marrying, having 2 children and 2 grandchildren in Glasgow his wife Margaret passed away and eventually he moved to Portsmouth where I lived with my parents. Grandad joined a Russian convoy club which at the time was based on HMS Belfast and did have a few meetings with other members. He also had them present at his funeral.