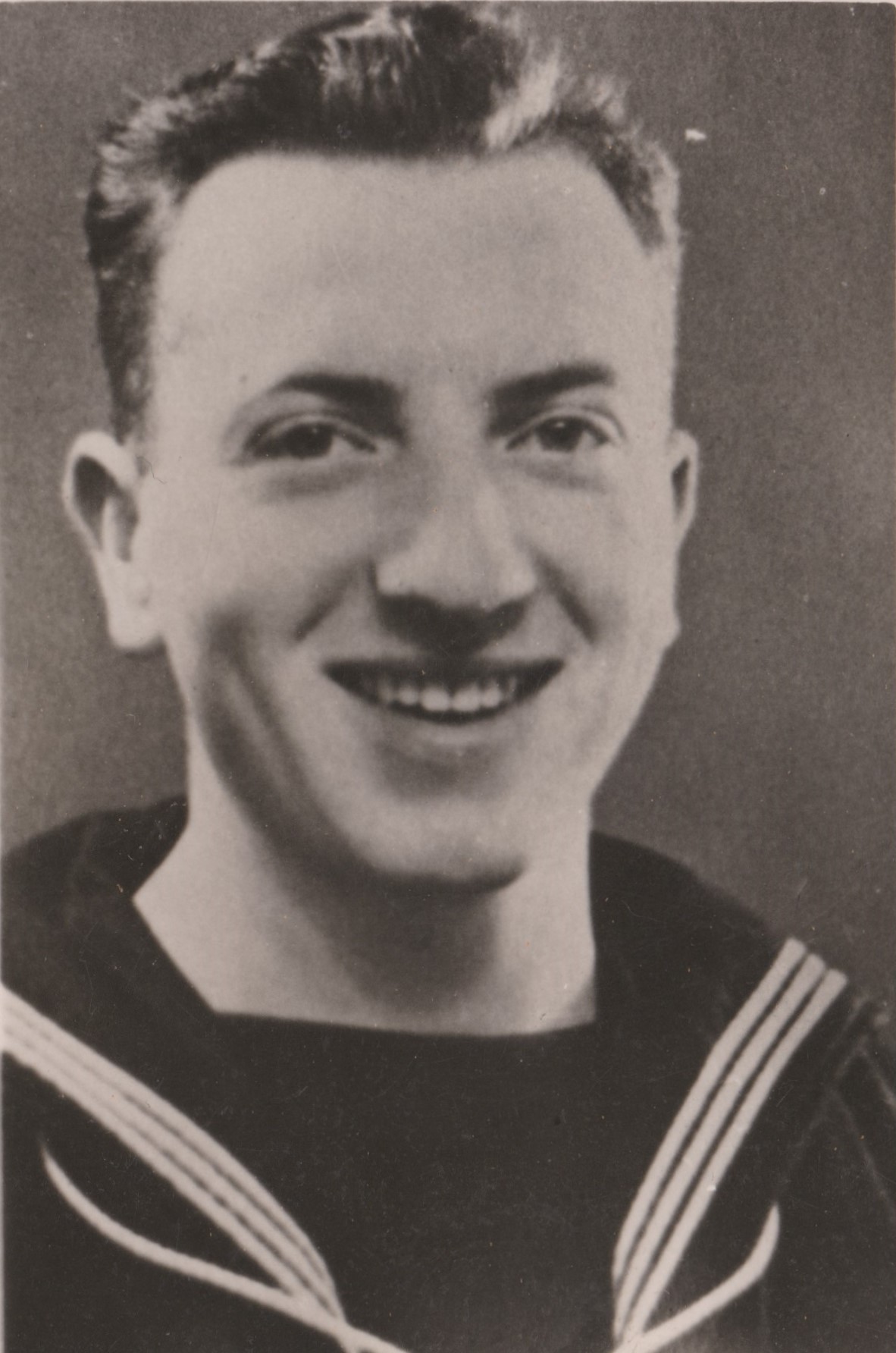 Before Les was called up he went to volunteer for the services and was directed to the Royal Navy. The officer that interviewed him noticed he was wearing a Scout badge and asked Les if he knew Morse Code and Semaphore. He did. “Right, you will be a signalman”. So that was the way Les was to spend most of the next six years of his life. On the 26th August 1940, Les had to report to HMS Ganges at Shotley to get his uniform and start his training, he also had to practice going up the mast. When at sea if a signalman let a flag go he would have to go up the yard arm to get the flag down. Many signalmen did not like to do this especially if the sea was rough and the mast was going to and fro over the sea – Les would do it for them.

After training at signal school, his first posting was to the signal station on Flotta, Scapa Flow. He then went on the destroyer Eskimo for two years and was involved in the Russian convoys, including PQ17 which Les found very upsetting, he said it was a disaster. When Les took the signal to scatter he was on the bridge with the Captain. The Captain thought it was wrong but had to obey orders.

The destroyer Tartar was short of a signalman and asked for a volunteer to join the ship, on the 1st February 1943, Les joined the Tartar. The Daily Express reported in December 1943 that, “Russian convoys, North African landings in the Tunisian campaign, the capture of Pantellaria and Sicily, the invasion landings of Messina and Salerno, the Tartar came through every Mediterranean action in the last year without casualty. Since July the Tartar has been dive bombed many times, straddled by shells many times and attacked by torpedoes many times. That is why the commanding officer thinks the Tartar has a Guardian Angel”.

When the Eskimo and Tartar were on the Pedestal Convoy to Malta, it was just in time to stop the Maltese people giving up. A year later when the Eskimo & Tartar were in convoy together again, the Eskimo got a direct hit (12th July 1943) and the telegraphist was killed, just where Les could have been. (There were 19 fatalities & 22 other casualties who were transferred to a hospital ship.) It was said in the forces never volunteer for anything, Les volunteering to go on the Tartar may have saved his life. Due to the damage incurred to the Eskimo, it was towed by the Tartar into Malta.

When Les was off duty he would go down to the telegraphist room and take down the dictation news, he would then type it up and put copies up around the ship. The crew were always pleased to know what was going on. When Les was on shore he would always try to visit the local Methodist Church and Scout Group, he always received good hospitality. He was eventually demobbed on 27th March 1946.

In September 1945, I started work at the East Ham Insurance Committee, when Les was on leave he would call into the office to see the staff. I first saw him in his navy uniform on one of those occasions. When he was demobbed he came back to work at this office as the Finance Officer, with the National Health Service due to start in 1948 there would be many opportunities for him. Little did he realise that I had my eye on him as I was only 15 at the time.

We got married on the 8th September 1951 and we had 62 years of very happy marriage with 2 daughters, 4 grandchildren and 5 great grandchildren. (Great granddaughter Isabel was born with leukaemia and very sadly died at 3 months.)

Many years ago we went to Malta for a holiday. The day we went to the Museum, The Book of Remembrance in a glass case was open at the page of his friend the telegraphist, who was killed when he was on the Tartar, it gave us a funny feeling. We went on a boat trip around the harbour and I could see Les was going back to that awful time.

Les received the British Arctic Star in April 2013. In June 2013 it was agreed by our Government that the veterans would be awarded a Russian Medal, although he had dementia he understood what he was signing and was pleased. Les had passed away when he was invited to attend the Russian Embassy for the award, our grandson Trevor was very pleased to go and collect the medal. As Trevor was going back to his office he phoned me to say how good the experience was and he was very proud to receive it on behalf of his Grandad. Trevor said he was offered tea or vodka, I didn’t need to ask which he chose!!