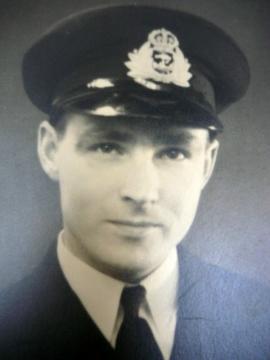 Maurice was born in Dundee in 1912, qualified at Edinburgh University, and was appointed to the Supplementary Reserve of the Royal Navy in 1939 soon after war broke out.

His first ship was the Tribal class destroyer HMS Somali in which he was involved in several operations in the Norway campaign of 1940, including his first Arctic experience in the Lofoten islands.

In a short diary written later in life he described that time as below:

“On a calm day in early spring 1940 I was summoned from my bunk by Dundas, my SBA (sick berth attendant). We were somewhere off Dysart and the sea was indeed a sight to see. Nelson, Rodney, cruisers, destroyers – all heading down firth towards Norway. The phoney war was over.

As day drew on the weather worsened and the fleet, now split to various areas, was rolling and spray covered.

My personal memory is of Glasgow wearing a huge battle ensign, her band master pumping her theme song “I belong to Glasgow” into the darkening torn clouds. As part of the 4 tribal destroyers comprising the escort, a magnificent sight, we were impressed but a little apprehensive at their approach to battle.

Fortunately we were turned away from the Norway coast – Bergen was already in enemy hands.

In the late evening as we approached Sullum Voe, we slowed down to bring (HMS) Gurkha casualties aboard, after she had been sunk.

My memories of the Norwegian campaign consist of piecemeal cameos, rather than coherent history. The approach to Andalsnes already enveloped in smoke from the bombing of the occupying troops. In the silence of a smoke filled lull, three large cruisers slipped up the fjord. A small Norwegian diesel fishing boat thumped her way out to sea. The gentle rumble of the cruisers turbines contrasting with the echoing thump of the diesel.

The arrival of General Carton-de-Wiart (15th April 1940) to take command of British Forces Norway provided us with an exciting long day. We had been in position up a fjord to meet the general’s Sunderland. Unfortunately a nearby German airfield spotted us first. Thereafter we were subjected to continuous dive bomb attack. Our survival was due to excellent ship handling by Harry Shaw the navigator.

A tribal destroyer’s full acceleration and turning ability is an awesome thing in a narrow fjord and near misses splintered the woods and shorelines. As our ammunition was running out the Sunderland arrived and the whaler was dispatched to pick up the general. He was very indignant that a rowing boat should pick up one of his rank.

He hadn’t realised that we dare not relax our high speed evasive action. We were now due to get out to sea. It was a remarkable and prolonged action. The general’s assistant ADC, the senior one being wounded, on recognising my medical rank, promptly demanded a whisky and soda and a life jacket!

At breakfast next morning in a dimly lit and nearly deserted wardroom I watched Harry Shaw idly chewing his cornflakes and twisting his forelock – a habit of his while meditating. Eventually he spoke and said “you know Doc, that was bloody dangerous yesterday!” The fear side had affected the rest of us 24 hours earlier!”

In 1942 Maurice was appointed to the aircraft carrier HMS Eagle, and was aboard when she was torpedoed and sunk by U-73 on 11 August 1942 whilst ferrying Spitfires to the besieged island of Malta.

He was next assigned to the newly converted Escort Carrier HMS Trumpeter, which was commissioned on 4 August 1943 in Portland, Oregon, USA. After passage through the Panama Canal, Trumpeter took part in several convoys ferrying aircraft etc from the US East Coast to Dundee, the Clyde and Scapa Flow. In early 1945 Trumpeter took part in Convoys JW 65 and RA 65 to Murmansk and some pictures of those days are enclosed.

At the end of the war Maurice returned to life as a GP in a rural practice in North Yorkshire, married in 1946 and had 4 children, He lived in Yorkshire until his death in 2001 aged 88.