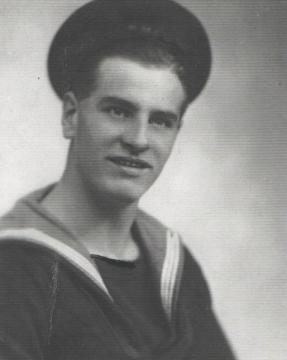 Information and photo by Mervyn’s family. Edited by Leona Thomas.

Mervyn served from 1942 to 1946. Having trained at HMS Raleigh and HMS Drake, in June 1943 he joined HMS Saumarez, an S class Destroyer.

He was on a series of Arctic convoys from 12th November 1943 to 2nd November 1944. The most notable of these might be said to be JW55B, which sailed from Kola Inlet on 22nd December 1943 and engaged in the Battle of North Cape.

HMS Saumarez was providing cover to the Home Fleet. On Christmas Day 1943 the Scharnhorst sailed to intercept this convoy. Early on the 26th December, knowing that Scharnhorst was in the vicinity, the Commander-in Chief ordered his own force and the cruiser cover to close up in anticipation of imminent action.

At the same time the Scharnhorst became detached from her destroyers. Throughout that day various cruisers and destroyers sighted the Scharnhorst and engaged in action with her. Eventually a torpedo attack in poor weather and visibility brought about her end. She sank in the Arctic gloom and in spite of a search, only 35 survivors were picked up.

Following his time in the Arctic, Mervyn, aboard HMS Saumarez, took part in supporting landings and patrolling Juno, Gold and Sword beaches on D Day (6th June 1944). In 1945 Mervyn found himself variously in Trincomalee, the Andaman Seas and Nicobar Islands, taking part in “Operation Dracula” – invasion of Rangoon, when he celebrated his 21st birthday and notes “no tot!” Then on to Durban, Singapore, Malta, Gibraltar and finally demobilisation in May 1946.