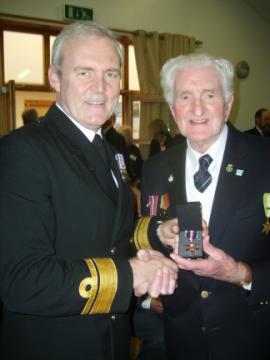 Murray Haddow joined the Royal Navy (as a conscript) straight from school at 18 and after training was posted to HMS Caprice, a destroyer, in March 1944, just before her commissioning. He was one of the first members of the ship’s company.

Murray says, “My main recollection is of almost 24 hour daylight during the summer Convoys and virtual total darkness in the winter months!”

Photo: Some of my shipmates on HMS Caprice; Myself, Malachy (Tony) Conroy from Rutherglen near Glasgow, Wireless Operator and Mick Maher from Exeter, Asdic Operator.