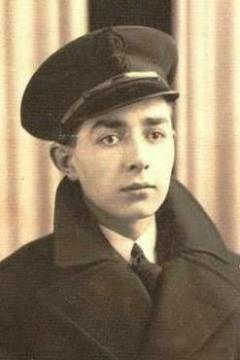 Let me begin our Father’s journey at the beginning….

Born on 31st December 1922, Peter was brother to his 4 sisters, Vera, Brenda, Daphne and Peggy. After finishing grammar school, he enrolled as an Engineering Apprentice at the Small Arms Factory in Enfield. However, the outbreak of WWII was just around the corner…

But it was not until March 3rd 1941, when he reached the minimum age, that as a fresh-faced volunteer was he able to enlist in the Fleet Air Arm. He joined the 813 Squadron which ultimately embarked upon the HMS Campania. It was this escort carrier upon which he spent most of the war, although he spent time on the Vindex and served on 10 Russian convoys until the end of the war.

Assigned to aircraft carrier duty, his engineering skills were soon put to very good use, trying to keep the ship’s planes airworthy. He often joked that the pilots used to crash-land them deliberately just to keep his team on their toes!

Those convoys survived 90mph winds, huge seas, dive bombers, and torpedo attacks from enemy U-Boats. But he said the most frightening thing was having his pilots take him on test flights in the planes that HE had just fixed!!!

Attaining the rank of Chief Petty Officer – Air Artificer, he was extremely proud of his ships contribution in escorting the Arctic Convoys to Russia.

After many years of fighting for recognition from the British Government, Peter and his war comrades finally received their Russian Convoy Medals and were honoured at the Russian Embassy in London in 2006. Sadly, due to ill health, he was unable to meet his comrades later that year at the reunion trip to Murmansk, Russia.

It was during the War he met Veronica, a WREN based at HMS Waxwing in Scotland. They married in 1944 and had five children, Kevin (who passed away aged 12), Peter, Tony, Chris and Carol. Peter then became a doting granddad to Stefan, Kerri, Callum, Georgia and Rebecca.

Peter was with us for 85 years and in that time the influence he provided is still felt by us today. Sorely missed by all our family, he may be gone, but never forgotten.

Photo – Certificate of presentation of the Arctic Emblem