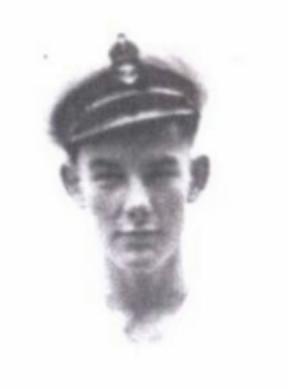 In April 1942 Reay Clarke was an Ordinary Seaman and he joined the training ship HMS Ganges in Ipswich before joining HMS Farndale (a Hunt Class Destroyer).

In September 1942 HMS Farndale sailed from Loch Ewe as part of the close escort for Convoy PQ18 to Russia and was dispatched from the convoy to escort a damaged merchant ship back to Scapa Flow.

“I joined the Royal Navy in April 1942 as an Ordinary Seaman. I finished my training at H.M.S. Ganges and was drafted to R.N. Barracks, Chatham and from there to H.M.S. Farndale at London Docks. H.M.S. Farndale, a Hunt class destroyer, had just finished a refit and we were a complete new crew. We sailed to Scapa Flow for our ‘Working Up’ training but this was suddenly interrupted and we were ordered to proceed to Loch Ewe.

I can well remember entering Loch Ewe late of a fine evening at the end of August. It was a magnificent spectacle. The loch was crowded with merchant ships, the green fields of the crofts rose up from the shore and, on the eastern horizon, the mountains of Wester Ross were outlined red in the sunset. I was one of the fo’c’sle party for mooring the ship and the matelot next to me, who had never before been far from Poplar, said: “Ere, Jock, where are we? This ain’t England”, to which I was going to reply that we were in Scotland and that my home was over there beyond those mountains, when there was a sharp command from the bosun, who was standing behind me: “Stop talking! Silence on the upper deck!”

At 16.00hrs on the 2nd September 1942 , we sailed from Loch Ewe as part of the close escort to Convoy PQ18. The convoy ran into a serious storm and we were despatched to gather some of the scattered merchant ships when a German submarine suddenly surfaced just astern of us. We attacked with gunfire, the submarine crash dived and we followed up with depth charges. That submarine did sustain some damage but continued with her patrol, attacking the convoy again some days later.

We went in to Hvalfjord to oil and then continued north into the Greenland Strait where we were joined by more vessels from Iceland taking the convoy up to a total of 44 merchant ships. We sailed north-eastwards towards Bear Island. The attacks from submarines and aircraft were just beginning when we, along with another Hunt class destroyer, H.M.S. Eskdale, were despatched back to Scapa Flow as escort to a merchant ship which was having trouble with its engines and unlikely to reach Archangel. We ran into another storm which swept away the whaler, damaged the motor boat and cleared all the guard rails off the starboard side of the ship.

At Scapa we secured alongside H.M.S.Tyne, the destroyer depot ship, where we got hot showers and a hot meal and warm fresh white bread. A signal was awaiting me to leave Farndale and proceed to Portsmouth to start training as an engineer, for which I had applied while at the training ship. Having qualified as a motor mechanic, I spent the rest of the war with the 25th M.T.B. Flotilla, Light Coastal Forces, in the Far East. I came home in February 1946 and was demobilized in June of that year.”

A month after PQ18 Reay left the ship and begin training as Motor Mechanic. Qualifying as Leading Motor Mechanic, Reay then joined 25th Motor Torpedo Boat Flotilla which was dispatched to HMS Braganza at Bombay in October and by July 1943 he was a Petty Officer Motor Mechanic on Braganza. He served on board the ship until returning to the UK in January 1946 (to HMS Victory) before being release in June to Class A Reserve.

Reay has since attented several memorial services at Loch Ewe.