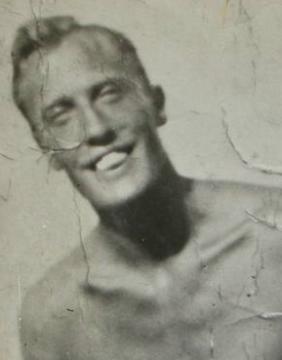 On 6th October 2014 I am proud to say I received the Arctic Star on behalf of my late father, Richard Keith Pexton. My family are delighted and we are very grateful to the people who worked hard to have the Arctic Convoys recognised.

My late mother told me my father had been brave and witnessed many horrors and hardship. However, the main story he told me as a child, was about a reindeer on board one of the ships he served on – HMS Kent. He also told me that when one of his ships was torpoeded he was in the water and saw the ships’ cats swim past wearing their life jackets which the sailors had made out of ping pong balls and he thought ‘If they can survive, so can I.’

I liked these stories a great deal and told an Old Colonel at a Remembrance Day Parade about Olga the Reindeer and he said: “My dear, I think that is a real salty tale.” (implying it was a lie). I therefore thought for some time that my father had been having me on.

So you can imagine how overjoyed I was to find a photograph of Olga in my parents’ home. It vindicated the story. On research I discovered that Olga was given to the ship by the grateful people of Mermansk and it eventually ended up at Glasgow Zoo.

I was also told that my father was on a ship that was hit off Mermansk Harbour and ‘turned turtle’. He was in the engine room and had to work out how to get out. It was a very unpleasant and frightening experience. He told me he was covered in blood and it wasn’t his. I believe the ship he may have been on at the time was a flower class cruiser called Daffodil but I am not sure. The names of ships I believe my father was involved with were HMS Kent, HMS Sheffield, The Daffodil and The Hardy.

If anyone knows about these ships and any information which puts the jigsaw of information together I would be grateful. Sadly my brothers who were interested in researching have both died and it is up to me to find out what I can. He told me he had a trunk full of special first edition books and a typewriter which unfortunately went down the ‘oggin’ with one of the ships he was on. I also have a certificate which he was presented with for crossing the Arctic Circle.

My father was only a teenager of about 15 when his father insisted he went to HMS Dartmouth to train as an Engine Room artifiser. That was before the war. He was in charge of engine rooms during the war and when my mother met him at Chatham Dockyard he was a dashing figure with his cap badge that had gone green. She said the ship he was on at the time (I don’t know which one) had been hit and could only reverse into dock. She worked there handling the wages and said the ship was the talk of the place that day. The ‘dockyard maties’ were taking bets as to whether it would sink before it made it to dock. I gather he played water polo for the navy and served in Burma and the Atlantic during the war. She was introduced to him and the rest is family history. He eventually got involved in oil refinery and pipeline construction and became a director of Constructors John Brown (CJB)