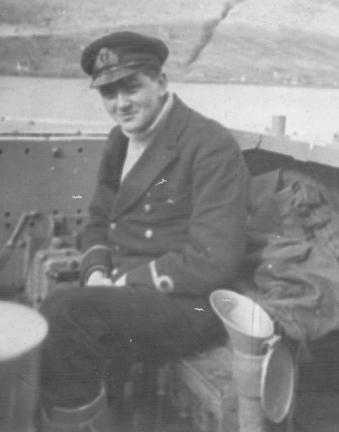 1942/43 Navigating Officer on HMS Ledbury on several Arctic Convoys including PQ17. Robin joined the Royal Navy as a cadet in 1936 and retired as commander in 1972.

Written by Robin A. C. Owen

The Scattering of Convoy PQ17

On approaching the Barents Sea, the convoy was heavily attacked by the German Air Force and U-boats. Due to faulty intelligence the Admiralty wrongly believed that German naval ships including the new battleship TIRPITZ, had left the shelter of the Norwegian fjords and were about to intercept the convoy. If this happened, the convoy escort would be outgunned, possibly sunk or driven off and the convoy of about fifty helpless merchant ships destroyed.

The convoy was ordered to scatter and its ships to “proceed independently to their destinations”. At the time, on LEDBURY’s bridge, we knew only that we were to reverse course, abandon our station as one of the close escorts and join the cruiser squadron some miles distant. Our designed maximum speed was 24 knots, several knots slower than the cruisers and fleet destroyers we were supposed to rejoin but now rapidly receding to the west.

At any moment we expected to see the masts of the TIRPITZ appear over the eastern horizon, followed by salvos of fifteen inch shells. The telegraphs were put to Full Ahead, the captain sent below for the Chief and urged him to squeeze all the revs he could. The boiler fans roared, the funnel paint began to blister and in the flat calm sea, low sea temperature and a high barometer, he actually got one and a half knots more than had been obtained on our acceptance trials in the Solent six months earlier.

But the rest of the fleet was still getting away from us. There now occurred a dramatic incident.

Two days earlier we had rescued four German airmen whose plane had been shot down while attacking the convoy. One had been shot in the hand and our doctor had had to amputate his shattered finger. The Germans had not been placed under any restraint while on board and with the ship at Action Stations they had been assigned to first aid and catering duties. Our Captain, Roger Hill now sent for them to be brought on to the Bridge. Through one of our officers who spoke German, he told them exactly what was now likely to happen and that since everyone in the ship was at equal risk he expected them to assist in their own and others’ survival.

They were emphatic that none of the German big ships were at sea or likely to be. But we never knew whether they had any actual knowledge of their navy’s intentions, or whether it was mere defiance, or maybe just the contempt of airmen for their navy. The German Navy did not appear but the convoy was almost totally destroyed. A few days later we were back in Scapa Flow. Our passengers, who had behaved in an exemplary manner, were now removed under heavy police escort and destined for a Prisoner of War camp. They had had several lucky escapes.