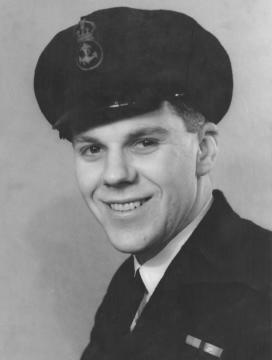 Ronald Hunt has been awarded the Atlantic Star and the equivalent Ushakov Medal from the Russian Federation to commemorate his Royal Navy service on the World War 2 Arctic Convoys. Ronald, of Hampton, served in the Royal Navy as a Petty Officer on HMS Sheffield, a Town Class Cruiser.

The Sheffield took part in a number of actions against several major German warships during WWII, and significantly, was involved in convoy protection as one of the escort ships deployed with cargo ships taking vital supplies and military equipment to Soviet Russia from North America and Britain. Ronald, in common with others, have now been formally recognised for their service 70 years ago.

Ronald was born in Brentford in 1925 and grew up in the Twickenham area attending St Stevens then Orleans schools as well as being a member of the local cubs, scouts and choir. He was “called up” for service in the Royal Navy in May 1943 at the age of 18 and undertook basic training at Butlins Holiday Camp at Skegness, where he recalls that the camp had the space and accommodation necessary for military training but not quite the right atmosphere to prepare them for war! His pre-deployment training was conducted at Chatham Barracks before deploying on HMS Sheffield.

He first deployed to the Sheffield at Plymouth, but at the time neither he nor the majority of the crew had any idea where they were going. He recalls the parts of the 2 Arctic Convoys that he was involved in, and periods when they were under attack from German ships and aircraft where it was literally a case of “all hands on deck” with crew moving anti-aircraft ammunition to the weapon stations whilst under fire! He also remembers when the Sheffield was in the battlegroup led by the HMS Duke of York that sank the German battleship Scharnhorst in the Battle of the North Cape on Boxing Day 1943. This action had huge significance on the remaining Artic Convoys and represented a turning point: The Scharnhorst and other German battleships such as the Tirpitz were based in the Norwegian fjords which were in easy striking range of the convoys so the outcome of this battle resulted in the Germans unable to deploy their capital surface ships against the Allied convoys to Russia. Through the actions of the RAF and naval midget submarines the threat presented by the Tirpitz was effectivevely neutralised as she was unable to leave the safety provided by the fjords and did not play any significant part in the remainder of the war. Notwithstanding this, there were still a significant number of military and natural hazards for the RN and the merchant seamen to endure.

He also recalls that the Sheffield could not support the D Day landings in France in June 1944 because of damage sustained to their propellors in one attack. Following the cessation of hostilities in May 1945 Ronald was land based in Schleswig Holstein in NW Germany with Royal Marines guarding captured German soldiers. He was “de-mobbed” in December 1946 after 3½ years of navy service. Post war he was employed in a number of jobs that had nothing to do with the navy or the sea, and settled in Hounslow then Hampton where he now lives.

The Atlantic and Arctic Convoys

Maritime convoys started to be used at the beginning of WWII in 1939 delivering supplies from North America to Great Britain. Following the German invasion of Russia in June 1941, Churchill and Stalin signed a treaty of “mutual assistance” against Germany and the convoys played a critical role in delivering vital aid to Russia. Originally, convoys were unarmed, but a system had to be developed in order to counter the deadly threats presented by the German navy and air force as the war developed. The convoys of large groups of merchant ships were escorted by military vessels to provide protection against enemy submarines, surface ships, mines and air attacks.

The Allied convoys to Murmansk and Archangel commenced in August 1941 to the war’s end using a route of 2,500 miles that crossed the Arctic Ocean. Sailing around the Northern tip of Scandanavia, the convoys were exposed to large concentrations of German warships that had ready access to the sealanes on the route to Murmansk from the Norwegian ports that they adopted following their occupation in April 1940. The convoys set off on the “Murmansk Run” as it became known, every month except during the summer when the 24-hour daylight significantly increased the vulnerability to German attack. Beyond the threat of enemy action, men endured fearful weather conditions, stormy waters of the Arctic Ocean and the darkness of the polar winter. If ships were sunk, the convoy would not stop and sailors perished within minutes in waters barely above freezing.

The largest convoy, PQ-17 formed up off the coast of Iceland in June 1942 and was composed of 35 cargo ships with 150,000 tons of aid, 6 destroyers and 15 other armed vessels. However, even with the warship escorts these convoys were incredibly vulnerable because the overall speed was dictated by that of the slowest ship, the possibility of ship-to-ship collisions in the necessarily tightly packed shipping arrays and the extreme weather conditions during their passage to the Russian Arctic port of Murmansk.

The campaign cost the lives of around 3,000 sailors and merchant seamen – over 100 civilian and military ships were lost, and it is thought that only 200 to 400 sailors – all now in their late 80s at their youngest – survive from the four-year-long campaign, a mission Churchill acknowledged was “the worst journey in the world”. On the whole, these convoys delivered about 4.5 million tons of cargo, which represented about a quarter of western allies’ total aid to the Soviet Union comprising over 7,000 aircraft, 500 tanks, anti-tank guns, cars, fuel, medicines, uniforms, metals and other raw materials. Without this aid Russia could have been isolated from the west and the whole outcome of the war would have been very different.

The Arctic Convoys were regarded as the most hazardous missions that a seaman could undertake in World War 2, referred to by some as “suicide missions”. With the surviving seamen at their youngest in their late 80s now, the British and Russian governments decided to commemorate their bravery this year each with a specific medal.

The Arctic Convoy campaign received sustained public support and national media coverage for 16 years with a Downing Street petition in 2004 receiving 42,000 signatures. In February, veterans of the bitter convoys to Murmansk 70 years ago could finally apply for the new version of the Atlantic Star which recognises service between 1941 and 1945 delivering vital aid to the former Soviet Union. Arctic Convoy veterans have always stressed that their campaign was entirely different from that in the Atlantic (keeping Britain’s sea lanes open): Different aims, different conditions – and this should have been recognised with a specific medal, not the original Atlantic Star which was awarded when hostilities ended. The Queen approved the design for the medal, which was cast by the Royal Mint in March so that it could be presented as soon as possible to the men played such an important role during the war. They are made in exactly the same way as the 1939-1945 stars. Bronze is the traditional metal and they have produced these new stars in the original manner but given the horrors they faced, the Royal Mint have taken great care in the production of the Star.

In September, the Russian Federation formally recognised the role of the Arctic Convoys in WW2 and the bravery of our servicemen and merchant seaman. The Ushakov Medal was awarded to a small number of the surviving seamen at a ceremony hosted by the Ambassador of the Russian Federation to the UK, Dr A Yakovenko, at his London residence on 16th September. Regrettably Ronald was unable to attend the ceremony owing to poor health, but members of his family received the medal on his behalf in October and were able to present it to him subsequently.

The Medal of Ushakov was a Soviet military award created on 3rd March 1944 by the Supreme Soviet of the USSR. It was named in honour of Russian admiral Fyodor Ushakov who never lost a battle and was proclaimed patron saint of the Russian Navy. The Medal of Ushakov is a 36mm diameter circular silver medal with a raised rim. The medal is suspended from a standard Russian pentagonal mount by a small silver metallic chain hanging from both upper corners of the mount going through the anchor shackle and bottom of the pentagonal mount.