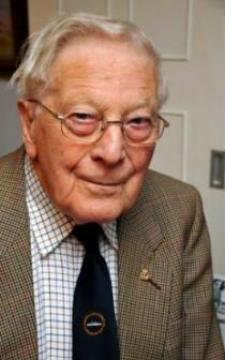 For Roy Dykes, the 16 Arctic Convoy missions he went on during World War II were the ‘hardest’ four years of his life. The 92-year-old this week described the freezing cold conditions on board HMS Honeysuckle – the ship he served on between 1941 and 1945, delivering vital supplies across the Arctic Ocean to the Soviet Union.

The grandfather-of-four said: ‘If you take a frozen package from your deep freezer and hold it in your hand, in a matter of seconds your fingers will start to hurt, and the tips will start to turn blue. It is very painful and if you don’t drop it quickly, it will stick to your hand. Think of the short seconds taken for that situation to happen, and then relate it to a man thrown from his ship as it blows up into a sea that has ice sludge floating on the surface.’

Mr Dykes added: ‘The decks would be very slippery with ice, and the ship would be rolling, but you daren’t touch the rails because if you did, you would lose your skin. The hardest part was trying to get some rest. We had 24 hours of daylight and we were constantly attacked, not by single aircraft but hundreds at a time.’

Food was simply a piece of bread and corned beef because the ship’s cook was given other roles on board and had no time to prepare proper food. ‘It really was the hardest thing I have ever had to do in my life. They really were battles, there’s no doubt about that’, Mr Dykes said. He recalled watching The Lowther Castle being hit by two torpedoes, which then began to sink. As recorded in the ship’s log, written by Mr Dykes, he said: ‘The crew panicked and cut away the life-boats.’

Thankfully, all 65 crew members were rescued by the crew on HMS Honeysuckle, but the captain was missing.

Mr Dykes said: ‘The ship was on fire and continued to be bombed by aircraft.’

A search for the captain commenced, and he was eventually seen clinging to an upturned lifeboat near the ship.

Mr Dykes said: ‘We called out to him to let go and swim the short distance to our sea boat, but he must have been so traumatised as a result of that morning’s attacks, and witnessing the destruction of the Empire Lawrence without trace on his port side and the attack on the Empire Purcell to starboard of him ‘the captain took no notice of our pleas to help save him.’

The sea boat was forced to return to HMS Honeysuckle. Mr Dykes said: ‘The Lowther Castle gradually turned over and sank, with the captain going down, still holding on to the upturned lifeboat.’

He added: ‘That’s the sort of thing the public should know about. It’s not just about the campaign for a medal – it’s the stories behind that medal that are important.’

In September 1941, Mr Dykes remembers waking to the distant thud of explosives. He went on deck to see a burning ship, the Pink Star US, in the distance, as the Honeysuckle headed towards her. He watched as the ship sank, hearing voices in the water, including someone singing a hymn.

Mr Dykes, who joined a crew in a boat in an attempt to rescue some of the survivors, said: ‘There were voices calling out, coughing too, and still that lonely voice singing a hymn. We were getting closer but the voices seemed to diminish in numbers.’

Two survivors were pulled from the water, said Mr Dykes. He added: ‘We laid them in the bottom of the boat amongst our feet, coughing and shivering.’

A final touch of humour and human interest – I had sent a card to Lt Cmdr Roy Dykes to acknowledge the success of his major part in the Medal campaign. He telephoned me on Saturday evening and said that the presentation went very well indeed. His was the first medal presented at 10 Downing Street. He said that when it was time to be taken to HMS Belfast, Prime Minister David Cameron beckoned to him to stay – you come with me. He was escorted to the PM’s car and along with police outriders and blue flashing lights, they led the way to HMS Belfast. It was his childhood dream come true at the same time as his dream throughout his adulthood coming true! (by Ruth MacFadyen)