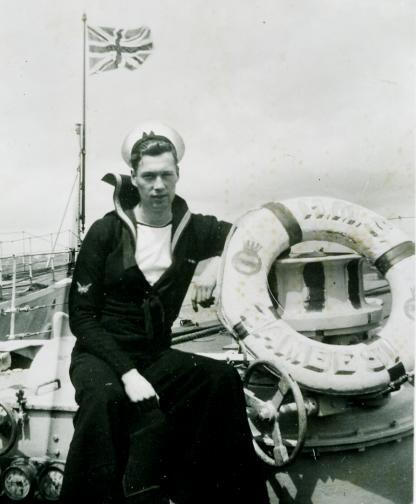 Written by Roy Elwood, photos courtesy of Roy (many of Roy’s photographs were taken by Derek Hirst).

In September 1943 I was called for service in the Royal Navy and did basic training at HMS Glendower, a shore base near Pwllheil, North Wales. I then trained as a radar operator on the Isle of Man before joining HMS Zambesi, a Z class destroyer newly built at Cammell Lairds yard in Birkenhead. The ship’s company, two hundred plus, included twelve boy seamen who had signed on for twelve years to start from when they became eighteen! For the rest of the war we formed part of the Home Fleet based at Scapa Flow.

I was a radar operator and for some reason in charge of the paint shop. Watch keeping and my “action station” involved scanning a screen to spot enemy ships or aircraft. The radar cabin was a dimly lit, smoke filled room, and on Arctic convoys we often spent hours at action stations. Sleep deprivation was acute so we struggled to keep awake.

Returning from Russia with Convoy RA-64 in mid February 1945, there were U-boats waiting for the convoy to leave and two ships were hit including a corvette, HMS Bluebell, that was next to us that just disintegrated. Only one man survived. Later we met with very heavy weather, claimed as the worst experienced by any Arctic convoy.

The ships were not able to stay together, but in such bad weather they were safe from U-boats. After the worst night, I recall our two boats still hanging in the davits but smashed beyond repair. As the weather eased most of the convoy was brought together, but the SS Henry Bacon, an American ship with nineteen of the Norwegians we had rescued on board had mechanical trouble, and perhaps a misunderstanding about her position.

She was about fifty miles behind the convoy and just north of the Arctic Circle when she was attacked by about twenty-three German planes (Junkers 88) armed with torpedoes. With guns manned by the American Armed Guard, it seems she put up a good fight, but was hit and Zambesi led three ships to the rescue (HMS Zest & HMS Opportune). When she was hit we were about fifty miles away and it was over an hour and a half before we reached survivors.

Photos – HMS Zambesi, some of Mess No 1 and The Gun Crew in flash gear (by Derek)