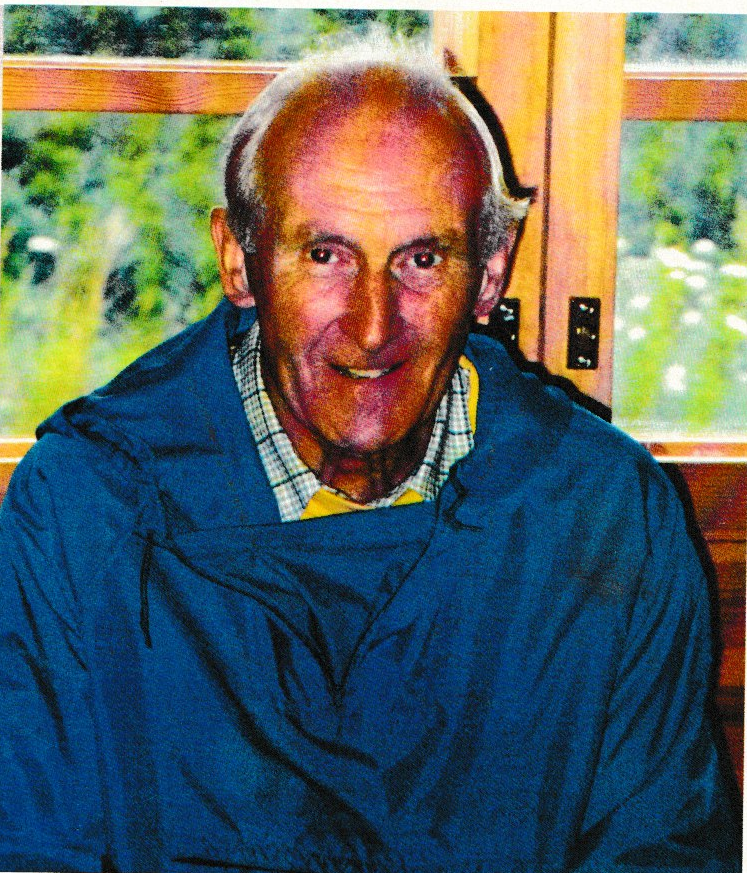 Our father’s name was Sidney Anthony Rotheray, though he was known as Tony all his life. His DoB was 1st January 1924 and he died on 30th December 2006.

Dad felt strongly that those involved in the Arctic convoys should receive recognition for their extraordinary endeavours and physical hardships and was successful in acquiring his Russian Commemorative medal in September 1992.

By way of his request he sent a letter to the Medals Section of HMS Centurion at Gosport and included some fascinating details about his naval career:

“I served as an officer, Sub.Lieut RNVR on board HMS Seagull from the end of 1942 until late 1945 and under the command of Cmdr. Pollock RN and later Cmdr. Ellis RNR, and participated in a number of Arctic Convoys to North Russia, mostly as Navigating Officer. HMS Seagull was part of the first Minesweeping Flotilla but was converted for escort duties and acted independently.  We undertook an unusual convoy
duty escorting six motor launches and five small minesweepers in October 1943 and managed to get through to North Russia with only four escort vessels.  On 1st Jan 44, homeward bound, the convoy was threatened by the German pocket battleship Scharnhorst (I think?) off the North Cape of Norway.  The fleet destroyers left us to intercept, HMS Milne I remember – the German battleship was eventually sunk.   Due to a large fuel capacity, we did not wait for a homeward bound convoy, at Murmansk in the Kola inlet, but usually continued as local escort down to Archangel and Molotovsk in the White Sea via Gorodetski”.

I am in possession of his Service Record and list below its record:

In spite of hard naval experience, Sidney’s love and affinity of the water never ceased as he windsurfed and then sailed right the way through his late 70s.

Dad retained some (poignant) and obviously relevant poems during his time on HMS Seagull. Sadly, other than the fact that they (2 of 3) were written by “Buffer” I have no knowledge of their source. Clearly they touched my father as significant as he had carefully preserved them in their aged and typed form. Here they are transcribed.

Old Seagull, in any kind of weather,

When we shout out “Stand from Under”,

And you hear our charges thunder,

Then to stand from under is the time.

Old Seagull, when you wake up in the morning,

Old Seagull, if you’ve to get up when its dawning,

Then’s the time to grin and bear it,

And remember all the easy times.

Come on Seagull, we’ve got to pull together,

Come on Seagull, let’s give ‘em hell for leather,

If it’s fighting or it’s sweeping,

You will always find us keeping,

Right in the forefront all the time.

THE OUTWARD TRIP TO RUSSIA:  OCTOBER 1943

A DIARY IN RHYME

When we were getting stores in for several months to last,

No, we weren’t going to Russia, our Russian days were past.

In one bag were some Topies, in another Whites,

Ah! We were for the warmer climes to see some different sights.

But that seemed to settle it, until one looked around,

And then one spied some other bags with different markings on,

And they weren’t things that’s suitable for wearing in the sun,

However, we were guessing until the “Harrier” came,

They said we’re off to Russia, we said “what a shame”,

We can’t be going with you, we’ve got our Whites aboard,

But everything was secret, it seems that “mum’s” the word.

At last, the day for sailing came and then it all came out,

That we were going to Russia too, of that there was no doubt,

The Skipper told us convoy work but of a different kind,

So we set out that evening all wondering what we’d find,

Our first stage was to Iceland, which took us three long days,

But there wasn’t any convoy there to meet our longing gaze,

Before we finished oiling, we got some orders then,

Be ready in ten minutes to proceed to sea again,

The oiling was completed, as much as we could get,

But the orders now were cancelled, we were relieved you bet;

It gave us chance to have a rest and have an all-night in,

Next morning came the convoy and we got a surprise,

‘Twas full armed Russian warships, could we believe our eyes?

The mist revealed five sweepers, with guns and all complete,

And six new motor launches, so small but they looked neat,

Are they going to make the crossing, through the Arctic regions?

If they make it, they can take it, there’s some guts in Stalin’s legions.

Now when do we make a start?  Some say it is today,

But we are waiting for the Skipper his conference call to pay,

All that day he waited for the call that never came,

So we had another all-night in to dream of things the same,

Next day we got our orders, proceed at thirteen thirty,

Pity the poor motor launches if we get it dirty.

The Skipper now he told us the job that we were on,

Was escorting these poor blighters towards the rising sun,

He said that we were heading eastwards towards the snow and ice,

And that we might meet some U-boats a prospect not so nice,

But we are always ready to do our little bit,

We have some hefty charges which put U-boats in a fit.

That afternoon passes to thirteen hundred,

Then it seemed that someone had blundered,

A signal came from some high powers,

What had happened to postpone it, was the weather dirty?

Another wait until next day, again at thirteen thirty,

We’d all been told our stations the “Harrier” was ahead,

The “Seagull” detailed for the rear, but we were nobly led,

The “Westcott” guards the starboard beam and on the port the “Eglantine”,

Of course we have another force, but they as yet remain unseen,

This then was the formation as we steamed out at last,

And we began to pitch a bit as through the boom we passed,

But we were much more comfortable than the little motor launches,

As we looked across and saw them almost sitting on their haunches,

We carried on all through that night and also the next day,

With not a sight of Bloem Voss or a U-boat on our way.

But on the second morning just after eight o’clock,

Three rings we heard upon the bells, that gave us our first shock,

We went to depth charge stations everyone at the run,

But we only dropped one depth charge and that didn’t get a Hun,

It may have been some fishes or perhaps it was a whale,

Anyway that depth charge had made the “Echo” fail,

Those motor launches oiled at sea, a feat that isn’t easy,

But since we had left the Atlantic roll it wasn’t quite so breezy,

That day there came a signal from the ‘planes up in the sky,

It said we’ve seen two U-boats as we were passing by,

On the surface they’d been spotted near the Isle of Bear,

And on the chart our course was marked very close to there,

One of the motor launches had now dropped to the stern,

But on looking through the glasses its fault we couldn’t learn,

Another one came flashing past and manoeuvred up beside it,

Someone transferred from this to that but before he’d really tried it,

A sweeper also came up ready to give a tow,

But as she came up astern, behold the darn thing go,

And so we travelled on and on right past that Isle of Bear,

But we didn’t see those U-boats if they were lurking there,

Perhaps they’d heard us coming and knew what we were worth,

And decided that they’d sooner face anything on earth,

The temperature grew colder, we had some snow each day,

Those Russian ships were sticking it, they were on their homeward way,

It was on the fifth day morning as we looked into the clouds,

We saw a friendly aeroplane, just one there wasn’t crowds,

We also saw another but it was a doubtful kind,

Perhaps Bloem Voss was scouting round to see what he could find,

Well, if it was and he saw us well I’m sure he’d hurry back,

To tell his boss the “Seagull’s” here, we’d better start to pack,

But there was nothing else occurred although we had a warning,

So we sailed on through the next night until, as day was dawning,

Some cliffs were spotted right ahead and they were white all over,

But it wasn’t chalk that made them white unlike the cliffs of Dover,

Here the convoy was to leave us for another port,

So they formed up and altered course this time without an escort,

Before they left us on their way their flags spelled out a message,

It said “Farewell, a pleasant voyage and thanks for the safe passage”,

Some flags were fluttering from our yards as we took up our stations,

They said “Goodbye” and to M.L’s special “Congratulations”,

Now our job was nearly done all that we had to do,

We’d brought those warships safely home, the different convoy had got through,

So, we’re here in Russian waters, for how long who can tell,

Maybe it won’t be long, we’re hoping so like HELL.

This is not a tale of woe,

Fantastic yarns of E A Poe,

But of essential things of life,

Beards that are grown ‘midst toil and strife.

It takes a MAN to grow a beard,

Say! If there ARE a few hairs short,

A beard grown by a bloke called Brooks,

Would make a cosy nest for rooks.

He reckons (when he gets back pay),

To spend some time and shave – ONE day!

Of Shiner Wright’s now I will tell;

Or Lieuty Jull, with patchy streaks,

Of Germany, the beard’s the map.

But looks as if his dial’s tarred!

Well, who am I to make such fun?

Perhaps these beards DO take the bun;

Let their growers shave at leisure

And give themselves the greatest pleasure.