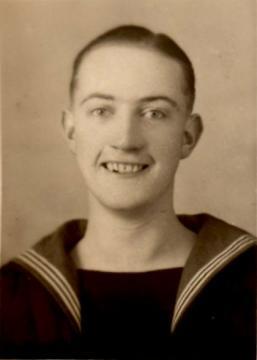 Late May/early June 1942 I was told I was to be sent to join HMS Bramble. At Chatham was kitted out with Arctic clothing – knee high leather boots, thick woollen long johns, duffle coat, fur hat and fur lined gloves. I was then on leave and told my fiancée Joan (later to become my wife) that I had been drafted to HMS Bramble.

On return to Chatham I was sent to Scapa to join HMS Bramble. I boarded HMS Iron Duke an old battleship being used as a depot ship. I had to stay there until I could join HMS Bramble where I helped with loading of provisions. On being taken off HMS Iron Duke was told I would be joining HMS Halcyon not Bramble. (My fiancée was a Post Office Telegraphist and had at some stage received as part of her work a message that HMS Bramble was missing. She thought I was on it and not until some weeks later when she received my cable from Archangel did she know that I was safe).

Trip to Archangel and Battle

After joining HMS Halcyon at Scapa I was told that at some stage I would go with the ship to Archangel and then join the combined Navy, Army and RAF wireless station there.

I recollect the extreme sea sickness I experienced, as unless the sea was like a mill pond I was violently sick and remained so for most of the journey. On arrival at Iceland I learned that we would join the convoy. This actually happened on the 30th June when together with other ships of the close escort group we joined a convoy of thirty three merchant ships – which was to be named PQ17. The wind was fierce, the cold was unbelievable and the waves enormous. The ice – miles and miles of it for several days and very close. Ice cliffs and ice flows.

And now for the battle. For the first few days from 30th June I thought the convoy did quite well. Submarine attacks, torpedo carrying aircraft attacks, the spotter plane which rarely left us but which was too far for us to do anything about it. Constant depth charges and barrages of anti-aircraft fire from the ships. I can remember the Captain of our ship – a cool man if ever there was one saying “watch the one to port”, “two coming in from starboard”. Constant noise of battle. I heard an instruction from someone to someone. “Tidy up at the rear”. This probably meant sink a ship which had been badly hit and from which survivors had already been taken. Regrettably a few merchant ships were lost but certainly to my recollection not many and in my opinion things were under reasonable control.

Came 4th July. During one aircraft attack I saw US destroyer letting off every gun it had. Why not! Independence Day. Our friends the Yanks went mad. Then came about 10 pm. A disastrous signal from Admiralty – “CONVOY IS TO SCATTER.” The buzz went round the ship that the Tirpitz was after the convoy. The convoy scattered, the escorting destroyers of close escort group left us (I was told later in order to join the Fleet for battle with the Tirpitz). The Halcyon became one of a small group of ships which decided to stick together. There was at least one trawler and I think at least one merchantman but altogether not more than about five I think.

The next main event that I remember is when we entered Matochkin Straits at Novaya Zemlya. A few more merchant ships also arrived there. A few Russians were there, I was told they had a wireless station there. The word went round the ship – Could anyone speak Russian? An interpreter was needed. We were fortunate one of us who were bound for the Archangel wireless station was in civvy street a journalist who could speak Russian. He was taken for a meeting with the Russians. I do not know what transpired.

While at Novaya Zemlya we were expecting the Tirpitz to turn up and blow us out of the water. It never did. After a short stay the ships who had arrived there then left into the Barents Sea again. We were attacked many times by aircraft, this time with bombs. Also later as we approached the White Sea. Near misses were frequent to our ship which shuddered with the force of the explosions. So far as attacks on the Halcyon were concerned I felt at the time that that was the worst part of the journey.

Eventually we reached the river Dvina and Archangel on 12th July. A few small close escort ships and about eight of of the thirty three merchant ships that started on the Convoy. Exact numbers have no doubt been recorded. A calamitous convoy. All who reached Archangel were very fortunate.

From 12th July until November 1943 I was working at the Wireless Station in Archangel. Assessment of my stay in Archangel – for me the worst part was the length of time I was away from home. With all my other drafts I was lucky to get home quite frequently if only for a few hours. I was also involved with English Channel convoy, LCG at the D-Day invasion of Normandy, and LCG at the invasion of Walcheren.

Dad was eventually discharged from the RN on 7th August 1946 by then Acting Leading Telegraphist. We remember dad recounting the story of sending mum a telegram saying he had a weekend leave and that they could get married by ‘special licence’! Stan and Joan were married on the 10th September 1944. I (daughter) always remember dad spelling out words for me in morse code which I loved.

Dad was a member of the North Russia Club but unfortunately developed multiple sclerosis around 1972 which he bore very stoically for years until he died on the 23rd November 1995. Stanley had two children; Ann & Graham both of whom married. Ann had two sons Malcolm & Trevor whom he was extremely proud of and saw grow up and Graham had three children; Chloe-Anna, Oliver and Kester (born after his death)