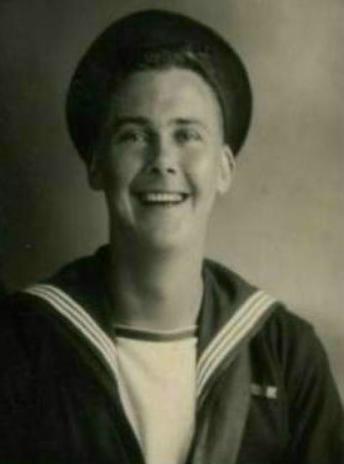 Stanley McKessock was born in 1924 in Bucksburn, Aberdeenshire. He was called up at the age of 18 and did his initial training with the army and was trained as a Gunner. It was 1942 and he was transferred to the Royal Navy. “The Navy seemed an easier job. How young and daft was I?” he has said. He served on Repellent (minesweeper) and HMS Premier (aircraft carrier).

He served on several ships and one of the first went down killing half the men on board. The only reason he survived was because he was on deck. They had just swapped shifts. “I don’t know how I survived. The only way I can swim is down the way. I had a life jacket on and there were mines around us in the water, like the kind you see in films”.

When his ship docked in Greenock the crew were given time off. Stan and shipmates set off for a well known dance hall in Glasgow; The Barrowlands Ballroom. It was here that he met a young Glaswegian Lassie, Ellen. Stan spoke Doric and Ellen couldn’t understand a word he said but she allowed him to take her and her friend home on the tram. They made a date to meet again. The date almost didn’t happen. “We were all issued with tropical kit and we thought we were going south”. The ship was painted blue. While painting, Stan fell and landed, luckily, between the ship and the water. He was sent to medical and treated for concussion. But he was meeting Ellen that night and, ignoring Doctor’s orders, he got up, took the bandage off and headed for the Barrowlands.

The following morning, they headed out to sea, where they were told to hand back their kit. “We were given overcoats, long johns, balaclavas, gloves… the ship was re-painted and and we went North. We were going to Russia. That was a surprise. It was cold. But the people were fantastic. They had nothing and what nothing they had, they shared with you. We gave them our balaclavas. One Russian gave me a jewelled dagger but someone stole it back on the ship. They were brilliant people, the Russians.”

Stan & Ellen wrote to each other and as she has said, “we were young and you never knew if someone was coming back. My brothers went to war, friends went to war, Stan went to war… they were just young boys. Some never came back. You just didn’t know”.

Stan recalls – “My Mother died when I was based in the South of England and I had gone home to Aberdeen for her funeral. I was sitting on the train from Aberdeen back down south and there was another young laddie who was heading back, the same as me. A group of lassies got on the train somewhere outside Newcastle and started talking to us. The next thing we knew, they pulled us off the train and we ended up spending the day at their work – a Newcastle Brewery! They were brilliant lassies… we got free beer all day. I made it back to my ship but I cannae remember how…”

In 1946, Stan was demobbed and briefly returned to Aberdeen. He then headed to Glasgow and married Ellen on Christmas Day.

They had six children & six Grandchildren. Ellen died in the early 1990’s from mesothelioma. Stan & daughter Anna nursed her through-out her illness at home for months. Stan slept on the floor beside her bed for the final few weeks of her life. He called her my wee wifie and they were together for over 50 years. His Grandson Callum McKessock Gordon was the bugler at the 70th Anniversary for Dervish (Aug 2011) at Loch Ewe.

Through-out his life Stan very rarely talked about the war and his experiences. In the last few years of his life he lived in Cornwall. Stan passed away on Wednesday 10th October 2012 at the age of 88.