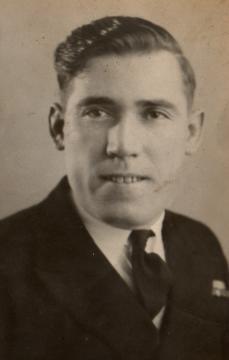 Terence Donovan (Terry) entered Royal Naval service in March 1940 at the age of 19 years 11 months as a Stoker Rating 2nd class; by March 1941 he had advanced to Stoker 1st Class and then by October 1942 he became a Leading Stoker. He eventually became a Stoker Petty Officer in June 1943. He served on HMS Pembroke, HMS Daedalus (Admiralty shore base), HMS London, HMS Newcastle, HMS Tyne, HMS Duncansby Head and HMS Kongoni (Assegai) shore base in Durban, South Africa.

He served on the Cruiser HMS London from February 1941 to February 1943 during which he was involved in its perilous journey on Convoy PQ17. Terry was aged 22 years when the convoys sailed for Arkhangelsk, Russia in June 1942. HMS London was amongst the First Cruiser Squadron under the command of Rear Admiral Hamilton accompanied by HMS Norfolk, and two American Cruisers: USS Wichita and Tuscaloosa.

Terry is not alive today to tell his story, but he sent a letter to a local newspaper giving an account of his wartime memories and I share with you below, in his own words, an extract from this account:

“My mind went back more than forty years and probably like many other surviving ex-Russian Run lads of Gwent I thought of those trips to and from Russian ports, of those nail biting apprehensive turns of duty in boiler and engine rooms with only a couple of inches of steel separating us from the icy Arctic and with packs of U-boats intent on making a big gap in those couple of inches of steel.

We all have our own fund of anecdotes and memories, both grim and happy, like when the might of our home fleet plus the French battleship Richelieu, the American carrier Wasp and cruisers Wichita and Tuscaloosa, a force of warships to scare off any aggressor, a force, that on the orders of the Admiralty turned tail and returned to base leaving PQ17 to the mercy of the enemy above and below the waves. This event shamed the navy and was the cause of many a punch up between Royal Navy and Merchant Navy personnel when they met up again ashore.

I remember when my ship HMS London carried Lord Beaverbrook on his mission to Moscow and I had seven days stoppage of my rum ration for daring to show my face on the upper deck whilst this Moscow delegation was transferring on to a Russian vessel in a Russian port.

There were memories of quieter times, like when the Queen’s father, King George came aboard and inspected us and I nearly had a fit when he spoke to me and asked if my uniform was normal issue or specially made, and when we were invited aboard an American Warship in Iceland to tea and a film show and were ceremoniously saluted aboard by Lt Douglas Fairbanks Junior.

I also remember when King Peter of Yugoslavia came aboard and we showed him how we catapulted our Walrus aircraft.”

Terry received the Russian commemorative medal in June 1987 (photo) and as he could not personally receive the Arctic Star, I have applied for it on his behalf and for his family to hold in his memory. I am proud of my father and all who endured this terrible journey on PQ17 and we should never forget the sacrifice of those who did not return home.

26th May 2014 Just to let you know that Dad has now received the “Arctic Star”. We are saddened that it came too late for him to receive it personally, but we will cherish the medal in his memory.

Terry’s daughter Vanessa has also created a “Tribute to Terry Donovan”, which you can view HERE on Youtube.