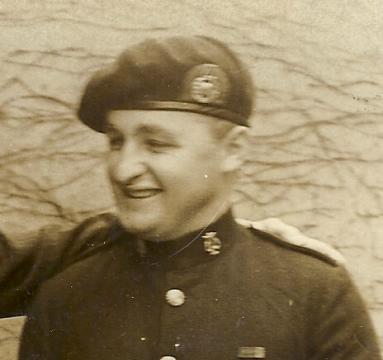 Born in Plymouth, Terry joined the Royal Marines as a band boy on 19 June 1934 aged 14 years. He trained as a flautist in Deal, Kent.

He was at sea throughout the Second World War and served on the following ships:

His time on the Sheffield included the sinking of the Scharnhorst and serving on the Arctic convoys. His war service also saw him deployed to the Mediterranean, North Africa, protection of convoys to Malta, the evacuation of Singapore, Atlantic convoys, and ending with a goodwill tour in Sydney on HMS Belfast.

Terry left the Royal Marines in 1950 and subsequently enjoyed a very successful career with the Blues and Royals as principal flautist. He married Sheila, a physiotherapist who worked with children with cerebral palsy, in 1953 in Windsor. He was a popular woodwind teacher at Eton College and other schools in Berkshire, regaling his pupils with many a tale from his musical journey.

On retirement Terry and Sheila moved to Wensleydale in the Yorkshire Dales where they spent many happy years close to their daughter Tricia and her family.

Now widowed and 93, he is living happily in Eastbourne, East Sussex close to his son David and his family. He has two granddaughters, Alice and Anna and one grandson William.

Terry has many amusing stories of his time in the Marines. They centre mainly on gambling, playing cards below decks, going ashore in Valletta where he visited the infamous Gut and played football. He enjoyed a number of weeks in the Brooklyn Naval Yard whilst the Durham was refitted. Docked in New York he experienced the great American swing bands, including Woody Herman, the Dorsey Brothers and the Harry James Orchestra as they played on Broadway. Typical of his generation he never mentions the hardships or the danger. The belated recognition for his part in ‘the worst journey in the world’ with the award of the Arctic medal will be a further fitting tribute to those to whom we owe so much.