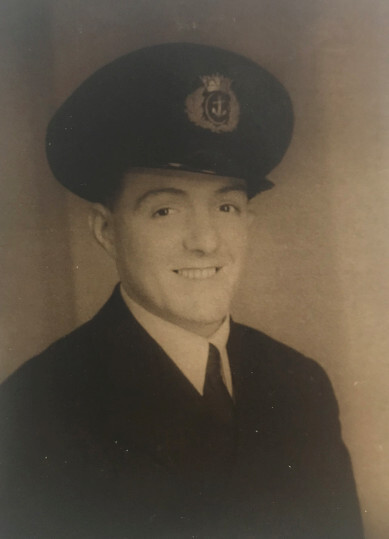 When war was declared in September 1939 Tom, of Hebburn on Tyne, was working for Hawthorne Leslie, one of a number of Tyneside shipyards, building ships for Britain’s war effort. However late in 1941 Tom, left his reserved occupation and joined the Merchant Navy Register and went to sea at the age of 23.

Tom had already served on 2 convoys over the North & South Atlantic when on this third duty his ship was torpedoed and sunk off the North African Atlantic coast.

26 December 1942 found Tom on his fourth convoy on-board the Clyde built ship MV Empire Snow, as ships carpenter… Leaving the Tyne that day MV Empire Snow made her way to join up with the other ships of the convoy in Loch Ewe which were gathering as Convoy Code JW52.

On the 17th of January the men and ships of convoy JW52 set off on their hazardous voyage, destination Murmansk. This was a torturous journey which even Churchill himself described as “the worst journey in the world” and as history has recorded was “a most uncomfortable voyage for all taking part”.

Certainly the stories I was told of this voyage as a young boy seemed to confirm this. Usually on winter evenings with the wind blowing outside and only an open coal fire to try to keep warm, added to the atmosphere and story image as he told us of his wartime exploits. He would explain how, in rough seas, the waves would break over the ship and instantly freeze on the superstructure. It was then all hands on deck to chip the ice away again. But, added to the discomfort, there was no hot meal to warm you up again, as the galley stove was more often put out of action due to flooding!!! Only ships biscuits to ease the hunger pains, with the mess deck awash.. Even when using the heads, he claimed they needed to chip the ice from the toilet before use… What an existence.

He always explained how the fear of being torpedoed and sunk was constantly playing on your mind especially in those rough icy waters. Considering his last ship was torpedoed and sunk, all-be-it in the warmer waters off the African coast, it would certainly deepen those fears to be sailing in those icy waters on his very next convoy duty, just a few months later.

Landing in Murmansk there was very little respite. The weather was extremely cold with biting gales force winds. While the Russian dock workers were friendly and work very hard alongside the British sailors to unload the valuable cargoes they remained somewhat distant.

For some reason the MV Empire Snow was not able to return on convoy RA52 so was delayed and returned as part of convoy RA53, which set sail from the Kola Intet on the 1st March 1942. This return convoy was not so lucky as the outward passage to Murmansk as RA53 was scattered due to heavy storms. On the 5th of March (ironically Toms birthday) 3 ships of the convoy were sunk by U-Boat action. But fortunately MV Empire Snow continued home without damage.

Interestingly HMS Belfast, now a floating museum ship in the Pool of London, formed part of the cruiser cover of convoy RA53.

After this convoy duty Tom continued to serve his country in the Merchant Navy for the rest of the war until his “Termination of War Service” in 1946.

Sadly Tom passed away, aged 70, in March 1988 and was always very proud of his war service. He was a quiet and considerate man who always put his family first, even if it meant he did without.