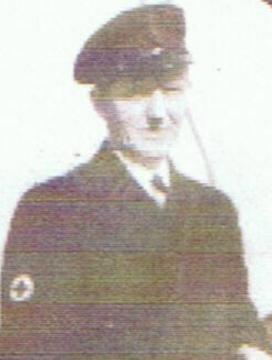 My father, Thomas Gadsby, enlisted into the Royal Navy in January, 1942 aged 35. He was a late recruit because of his age. Before his call-up he had the position of Departmental Manager responsible for the Ladies and Children’s Department at William Hollins, Nottingham – makers of Viyella clothing. He left behind a wife who he had been married to for eight years, myself Richard aged five and my brother, Geoffrey aged two.

The memories I have of the War before he was called up include digging out a hole for an Anderson Air Raid Shelter shared with next door; going in there at night with my father standing outside with our neighbour chatting away and if an aircraft was heard deciding whether it was one of ours. Our neighbour was elderly and had been in the First World War.

In the Navy he was trained as a Sick Berth Rating, more specifically a Dental Mechanic. He joined HMS Berwick on the 1st December 1942. The ship left Loch Ewe on the 15th December, 1942, my sixth birthday, for my father’s first experience of a Russian Convoy.

HMS Berwick was engaged on eight Arctic Convoys in one form or another. I remember my father telling me about his visits to Murmansk and Archangel. He brought back seal skin slippers and a dagger in a leather sheath. I think swapped for cigarettes on the quay at Murmansk. The ship was also engaged in other activities particularly in the North Atlantic escorting the Prime Minister to Canada and other escort duties. I have post cards of Halifax, Nova Scotia dated September, 1944. He also visited South Africa and Australia in HMS Berwick and was off Ceylon (Sri Lanka) when the war ended. He was demobbed in April, 1946 as Leading Seaman Gadsby. He came home on leave only occasionally, once when the ship was having a refit. HMS Berwick was one of the older cruisers in the British Fleet. During his time away he would do tapestry work suitable for fire screens or pictures using material and patterns my mother obtained. One friend, Sidney Ward who served for 4 years on the Berwick, made a model galleon which my father brought home. I know they played cards a lot, cribbage, whist etc.

He did not tell us much about his experiences. It was not until 1964 when I had visited Loch Ewe to go to the gardens at Inverewe that he told me that was where he was based. It was then he told me how they had practiced attacking the island in the Loch in readiness for attacking a German battleship. Trying to put myself into his position I guess my father accepted his position, got his head down, and did a good job. Working in a fairly isolated capacity – Dental nurse, mechanic to a Dental Surgeon must have been a big help for him to survive as he had been used to giving orders having had a responsible managerial job in civvy street. He had worked his way up through the ranks from leaving school at thirteen (special dispensation to be a bread winner after the death of his father). This meant that he had no formal qualifications which would have got him a higher rank in the Navy. On return I remember a holiday in Llandudno when he flatly refused to go on a sea cruise and it was not until much later I appreciated why. I did go on a cruise from Harwich to Edinburgh, Inverness, Orkney, Stornaway and Oban and back to Shetland and Harwich in 1997 and on standing at the bow relived the journey my father must have done.

In March, 1945 HMS Berwick visited Trondheim in Norway twice and on one occasion gave a party on board for local children. My father had a photograph of himself serving two young girls. I have made contact with these ‘girls’ now in their late seventies – one living in Norway and the other in England. I met the one in England in 2010.