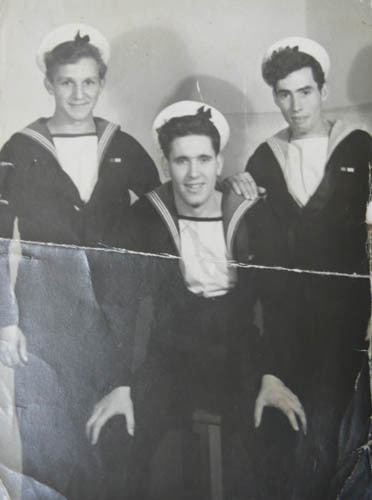 My father Thomas Iddon (Tom) served on HMS Magpie during the Second World War. HMS Magpie was a Black Swan Class sloop with the pennant number U82. The ship formed part of the 2nd Support Group whose home port was Liverpool,under the captaincy of the renowned captain, Captain Johnnie Walker. My father joined Magpie on the day it was commisioned and workup for joining the 2nd Support Group was done,based in Tobermory.

Primarily the duties of HMS Magpie lay in the North Atlantic and the ship played a major role in the Battle of the Atlantic. In 1944 Magpie was assigned a new role and left the 2nd Support Group to join the Arctic Convoy support group.

As far as I am aware my father sailed on two Arctic Convoy voyages from Loch Ewe to Murmansk. I remember him telling me the ship sustained heavy weather damage on the second voyage and they had to return to Liverpool for repairs.

Like many servicemen unfortunately my father never recorded his experiences and I never thought of doing it. I now wish I had.

I do remember one story quite vividly and I have seen photographs that bear this story out, and that was his fear of the ship capsizing due to the build up of ice on the ships hull,super structure,railings etc. He said he spent many hours on deck in terrible weather conditions in heavy boots and duffle coat chipping ice of railings to prevent the ship becoming top heavy and capsizing.In those icy waters they would have had little chance of survival.

I am very proud of my father and the part he played in the war with the Royal Navy, in those terrible times,but I also know they had good times as he played in goal for the ships very successful football team and he spoke fondly of his times in Scotland at Tobermory and Loch Ewe.

I think this project is superb and greatly appreciate the efforts in keeping the memories alive,this chapter in our history must never be forgotten.