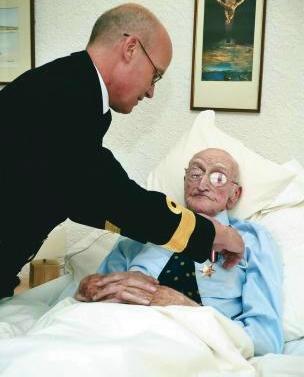 The following are extracts from a press release by the Royal Navy Press Office (HM Naval Base Clyde) 12th August 2013.

A veteran of the Second World War Arctic Convoys has been presented with the Arctic Star medal over sixty years after undertaking the dangerous mission.

Ninety-two-year-old Tom Burke was aged just 24 when he served with merchant tanker San Venancio on its hazardous journey to deliver supplies to the Soviet Union.

Leaving the Clyde on March 11, 1945, Tom and his shipmates ran the deadly gauntlet of German U-Boats, warships and aircraft to reach their destination at the Kola inlet, near Murmansk, ten days later on March 21.

Speaking from his Helensburgh nursing home, Tom, who is originally from Cardonald, Glasgow, described how the convoy had come under attack from German U-Boats.

“The tanker I was on was carrying commercial alcohol for chemical works on the White Sea”, said Tom. “We were all aware that to U-Boats we were a valuable target so it was particularly frightening to be on the San Venancio“.

“We had almost reached our destination when the convoy came under attack and all hell broke loose. A U-Boat came close alongside our ship, using us as cover from the Royal Navy ships in our escort. It was so close that we were actually bumping into it”, said Tom.

“Eventually a British Naval Destroyer dropped a depth charge almost on top of it. The explosion blew every piece of ice off the deck of our ship.”

“Tom, and the brave men he served with during the Arctic Convoys are genuine heroes”, said Commodore Wareham.

Witnessing the medal presentation on August 7 were members of Tom’s family – his niece, Elizabeth Webb and husband Bill, his brother John Burke, and sister-in-law Patricia and nephew John Burke who had travelled from Liverpool.

“I am very proud of my uncle”, said Elizabeth Webb. “The whole family is so pleased he was able to receive his Arctic Star medal in such a nice way. It was a long time coming to him, but it was all worth it.”