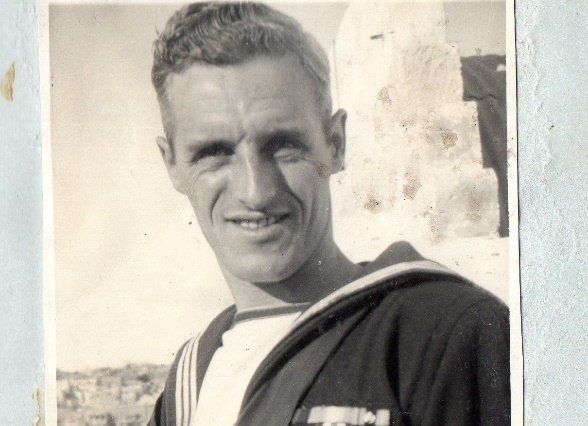 He served with her for most of WWII, largely on Arctic Convoy duties, between Scapa Flow and Murmansk (Russia), although he saw first action in the Vaagso Raid in the Norwegian Fjord, when ONSLOW was instrumental in rescuing troops who had been engaged in attacking Nazi positions. This was one of Churchill’s attempts to seize victories wherever possible in order to publish successful operations to encourage the British public. War records of the action and rescue include film of Onslow steaming very close to the coast to achieve a direct boarding of army personnel.

In December 1942, under Captain Vincent Sherbrooke she engaged the German battleship Admiral Hipper and pocket battleship Lutzow, together with six German destroyers, off the North Russian coast, in the Battle of the Barents Sea.

Capt Shebrooke was seriously wounded and lost an eye in the battle, but continued to give orders and direct the battle. Subsequently, his first lieutenant (Lieut Commander Marchant DSC) took command. Following his death, aged 90 in 1998, Commander Marchant’s widow maintained a close contact with the ship’s company and arranged for many reunions in Bristol, through to the 1990s.

Capt Sherbrooke – later Rear Admiral – was awarded the Victoria Cross and, eventually retired to the village of Oxton in Nottinghamshire where he became Sherriff of Nottingham, later in life. Living near to the village church, the local community recognised his contribution to the war and arranged for a display in the church which included the story of the battle, the award of the VC and where the battle ensign from ONSLOW, now hangs.

The other senior naval officer aboard, at that time, was Lieut. Lewis King (RNZN) – later promoted to Lieutenant Commander in the Royal New Zealand Navy after returning to his home country.

Lieut King took control of the fire party and the security of the ship from the damage caused by German shells, during the Battle of the Barent’s Sea. He called for all available hands to assist with the extinguishing of fires and I remember my Father saying that he was the first to be able to respond.

The German force eventually withdrew under fire from the Royal Navy and, as a result, Hitler replaced Grand Admiral Erich Raeder by Karl Donitz.

Lieutenant Angelbeck was Captain of HMS Vizalma (Escort Trawler) and was the first officer to greet Walter at the bottom of the gangway in Murmansk, following the Battle of the Barents Sea in 1942 with – “C’mon, Walter, let’s go and get a cup of tea”.

The story of Lieut Commander King’s involvement was sent to me from New Zealand by Donald Grant, author of “A Working Holiday 1940 -1945” who was the Radio Officer aboard ship, that day. One of his comments in the book related to the fact that, being without their own Mess, the Radio Officers had to choose one to join. He chose the Engineers’ Mess because “it was always the cleanest and the tidiest”. Being a Leading Stoker in the engine room, Walter Watkin and he could well have sat down together on many occasions!

Onslow was engaged in many Arctic Convoy duties, as well as escort duties in the Mediterranean and during the invasion of France in 1944. Most notable from my point of view was from 22 to 29 December 1943, Onslow formed part of the escort for Convoy JW 55B. An attempt by the German battleship Scharnhorst to attack the convoy resulted in the Battle of the North Cape on 26 December 1943, when Scharnhorst was sunk by the battleship Duke of York. The convoy itself was not affected. Onslow returned to Britain as part of the escort of Convoy RA 55B from 1 January to 7 January 1944.

King George VI also went aboard Onslow on her return to Scapa Flow, when Onlsow had the distinction of flying the Royal Standard.

During this return journey, my Father received a telegram from the Radio Officer (Jim Wheldon). It stated that I had been born on the 4th January 1944. Some thirty years later, when I was leading a teacher-training course in Cheshire, a headteacher from Chester approached me to enquire about my background. He then confirmed that he was the radio officer who had delivered the telegram to my Father aboard ship!

Subsequently, Walter was posted to RN Barracks, Devonport where he undertook his Petty Officer’s course and in September 1944 Walter joined the Fleet Minesweeper –
HMS Regulus in the Mediterranean. While sweeping off Corfu, she was hit by a mine and Walter had to swim for it. Naval archaeologists have recently identified her lying on the bottom, adjacent to the island.

Walter was rescued and taken to Valletta Barracks, Malta, where it was discovered that he was the only Engineer Writer in the Mediterranean, so he was transferred to Naples on the staff of the Captain (M.S) Mediterranean, as the Squadron Leader’s Writer, where he was billeted in an hotel.

After the gruelling years in the Arctic Ocean, this posting was more than wonderful. He would wake in the morning sunshine overlooking the port where the fishermen were bringing in their “catch of the day”. Then he would plan his days off, with friends, touring the area – Pompeii, Herculaneum, Rome, Sorrento, the Isle of Capri and the Opera.

From there, he was transferred back to Manoel Island, Malta, and was discharged in April 1946. He returned to his wife and family in Weaverham Cheshire, where he was greeted by his ICI Personnel Manager (JR Angelbeck), who granted him two weeks additional leave and the promise that his desk was where he had left it six years previously! So, he resumed his career as a Standards Engineer at ICI, retiring from full-time work in 1972 and sadly passing away from us in April 2004, aged 89. Surprisingly, his last hour was spent watching a TV programme about the Vaagso Raid in 1941 where there were some clear images of Onslow on which he was serving, at the time.

Photo: Walter at his desk at ICI Alkali Division on retirement in 1972.

Three of his brothers left their playground in the fields and woods of Cheshire to serve their country in the Royal Navy in WWII – Gordon. HMS Attacker, Aircraft Carrier; Ron – HMT Le Tiger, and Arthur – HMS Kipling, Destroyer, killed at sea, defending Malta in May 1942.
Although, he missed Arthur deeply for the rest of his life, like many I have met, since those dreadful times, he never complained about what happened to him, nor the way that it affected his peaceful life, before the war. He did enjoy the camaraderie which the Navy had offered to him and stayed in touch with a number of shipmates as they all rejoined society.

It is only now, some seventy-five years later, that my generation has begun to appreciate the tremendous contribution his generation gave to our peaceful upbringing, and our escape from the hell of the German menace.

Famous WW2 poet, Alan Ross, also served on HMS Onslow and was present at the Battle of the Barents Sea.

Entwining, as one turned the other

The forenoon, as two forces,

From each other breaking.

So Onslow rejoined in falling darkness.

Having aided the elements cancellation

Of each other; fire and water

A litany henceforth for all

Who had use for litanies.

The Sea of Barents received them

Of courage, for the weeping

Far from its keeping.