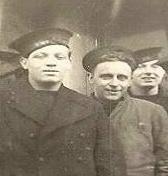 Wilf Townsend was born in Richmond Surrey January 1922. He left school at thirteen and went to work at Symonds and Hawker an engineering firm in Wandsworth. As this was a restricted occupation he was not called up at the start of war in 1939 joining the Navy in April 1942. His service record shows him training as a Signals Officer first at Drake 1 (Impregnable) followed by spells at each of Europa and Caroline. He first saw active service in the autumn of 1942 when he joined HMT Cape Portland pictured. Also pictured is a drawing of my father done by a crew mate in Mid Atlantic. Father added the wording at the top of the drawing at a later date. The artist signature dates it as February 1943.

He was involved in escorting a number of convoys en route to Murmansk up until June 1943 although my understanding is that Cape Portland only ever went as far as Iceland. The Commander during his time aboard was Lt. K.F. Rasmussen RNR. One convoy, UR.59, I know he was definitely on left Loch Ewe on 19th January 1943 arriving Reykjavik 23 January. En route Cape Portland rescued the two survivors from the Swedish merchantman Neva that had been sunk, after becoming separated from the convoy in a storm, by German Submarine U-358.

One photo shows the crew of Cape Portland in Iceland with father standing far left. Another photo in his collection shows Cape Portland in Londonderry with some of the crew in father’s words enjoying “an afternoon siesta”.

In September 1943 he was recommended to train as an officer as a specially selected rating. He was commissioned in December 1943 and as soon as he became a Sub Lieutenant on the 10th December he rang Jean Sacree to say he would be home on the 12th December to marry her. The wedding took place in Fulham where she lived. One consequence of this was that he became a lifelong supporter of Fulham Football Club.

He had an important role for Operation Neptune and in the preparation for D-Day in late May he attended the Orientation Conference led by Admiral Moon in the Garden Theatre HMS Drake Plymouth. He liked to tell the story that no-one below the rank of Lieutenant was allowed to attend so he was temporarily promoted but he did not receive any increase in pay!

On June 3rd 1944 his superior Officer became unwell so he assumed control of “G” LCT Convoy as Combined Operations Communications Officer for the RN/US convoy responsible for 135 assault craft. He joined the US Subchaser 1358 in Dartmouth and the convoy made up of craft from there, Plymouth, Salcombe and Brixham formed and with D-Day delayed because of bad weather they had to shelter in Portland Harbour.

Eventually they left late evening on the 5th transporting the American 4th Infantry under Major-General O.Barton heading for Utah Beach. As Signals Officer he was one of the first to land on Utah having to set everything up to organise troops landing. He said the beach was soon taken and the troops started moving in land about 09.00 hours. At 13.00 hours on the personal order of Admiral Pardee Moon father was moved to “Bloody Omaha” where he was to remain for three days.

Returning to Portland on the 9th June he took up duties as Signal Officer to Captain Wise Commanding Officer of Major Landing Craft for the subsequent build up of reinforcements to France. He was officially discharged on the 1st May 1946 nearly a year after I was born. He set up a small company with mates from the war working on building sites. This over the years developed into a major building firm. In 1963 he moved to the West country and became a successful Hotelier. He died in 1994. One of his prized possessions which I have are the Semaphore Flags that he had with him on D-Day.