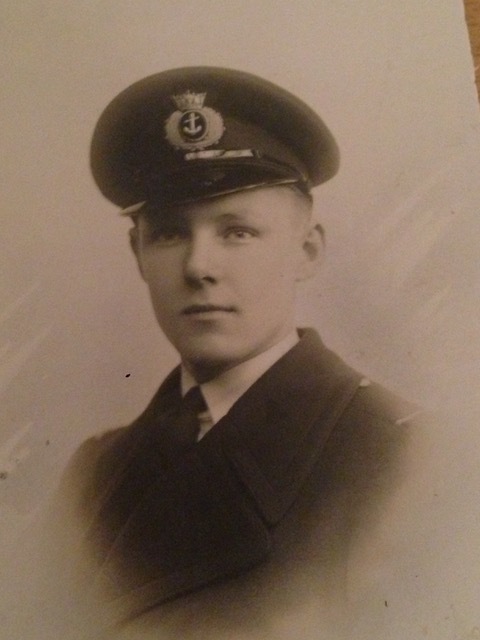 William Black was born on the 24th July 1921 in Largs, Ayrshire Scotland. He was studying Architecture when the war hit and he enlisted in the Merchant navy at the age of 19. His time in the war was something he rarely spoke of, as many don’t. However, as a child growing up, I remember my papa getting me to feel the metal shrapnel still in his head, of which they deemed too dangerous to try and remove but safe enough to leave in the rest of his life. Also his wisdom, “if you find yourself on a sinking ship, jump and swim as fast as you can, otherwise it will take you down with it”. I swear that is why I now have a fear of deep water.

In reality, we will never know what truly happened to him in that time. From the snippets he did share, I knew he had gotten to Murmansk and that he was a 2nd Radio Officer in the Merchant Navy, at some point along the way his boat was torpedoed and he was injured, to such an extent when his parents and my gran went down to England to see him in hospital, they walked past the end of his bed as they did not recognise him. But, he was incredibly proud that he was part of the Arctic Convoys.

It is only during research after his passing, that I found the name of the ships he was on. The family stories and the records don’t quite match up, so I am still working on this, but what I do know is he was on ships SS CLEARPOOL (162107) which he joined on 18/3/1941 from Cardiff. Also he was on SS BRIARWOOD (1607333) which he joined 18/03/1942 from South Shields. He was discharged in the same year as joining SS BRIARWOOD, due to being physically unfit for further service as a result of enemy action. If my research is correct, he laterally was on convoy PQ-14 , in which SS BRIARWOOD was designated the Vice Commodore’s ship. The convoy sailed from Iceland on the 8th April 1942, and were joined by HMS EDINBURGH and the Ocean Escort Group just off from Jan Mayan island, on the 9th April 1942. The Convoy hit heavy ice, of which many ships were damaged and were forced to return to Iceland. HMS EDINBURGH and 12 other ships, carried on to Murmansk. On the 15th April, 1942, the convoy was spotted by German Aircraft and many attacks were made on the convoy by them and U-boats lasting 3 days. The commodore’s ship of PQ-14, SS EMPIRE HOWARD was struck by a torpedo and was said to have sunk in 57 seconds, losing most of her crew including Commodore Rees.

On the 19th April, the seven remaining ships, including SS BRIARWOOD, arrived at the Kola Inlet and Murmansk.

On the 28th April 1942, the convoy QP-11 sailed from Murmansk. SS BRIARWOOD now the Commodore’s ship and escorted by HMS EDINBURGH, which was carrying $20 million in gold and 13 other merchant ships and other destroyers. On the 29th April 1942, the convoy was spotted by German aircraft and U-boats and attacked. HMS EDINBURGH was struck and badly damaged, and turned to go back to Murmansk escorted by two of the destroyers. German destroyers were sent to attack the convoy and then HMS EDINBURGH, which reached them on the 1st May 1942. HMS EDINBURGH was sunk, and the rest of the Convoy reached Iceland on the 7th May 1942.

Papa passed away on the 8th August 2008 aged 87. Will always have so much love and admiration for him, and all those who served in the Arctic Convoys. It truly was, the worst journey in the world.