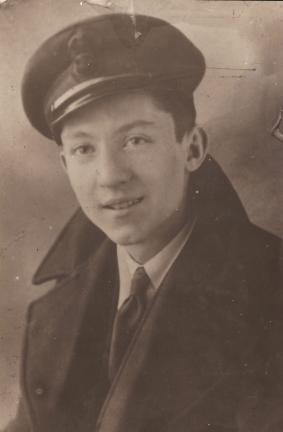 William George Mitchell, known as Bill, has written a book about his life which includes being on the Arctic Convoys. Bill went on in life to make many achievements in his career as a sculptor, artist and designer.

My husband William George Mitchell served on the Onslaught in 1942/44 – he is now 87 year’s old (in 2013) and we are happy to help with the petition about the Ushakov medal.

“We went back to Iceland, the convoy split up and we sailed on to Scapa Flow, where a splendid sight awaited us. The flotilla looked magnificent against the green-blue sea, which sparkled in the sunshine. All the flags were flying. It was very traditional. Each ship flew its number and saluted the flag of the Admiral of the Fleet.”

“As we came by the King George V, everybody was standing to attention on the quarterdeck, the whistles going and the battle flag dipped as we passed. The King George V itself was flaunting an enormous array of flags. It looked like a ship from the Battle of Trafalgar, and to my absolute amazement, somebody told me that the message signaled was about ME. He read it out: “2019 Mitchell William has been given permission to smoke a pipe.”

It was one of the biggest leg-pulls the Navy had ever seen. The truth, of course, was that one did not have to have permission to smoke a pipe. I wanted to disappear. This is an extract from his book “Self Portrait, The Eyes Within” Chapter 4 Murmansk (from Self Portrait). Click the download link on the left to read more.

Bills Book is available to buy from WhittlesPublishing HERE