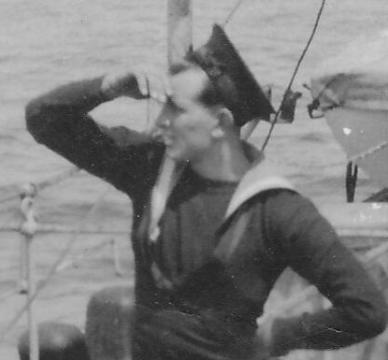 My father, William (Bill) Snape, enlisted for the Royal Navy in 1940.

His service began on March 27 1940, when he was just 20 years old. His initial training was at HMS Torpoint and later that year he was transferred to HMS Pembroke at Chatham and from there to HMS Wildfire at Sheerness. Leaving there in 1942 with the rank of able-seaman, he went to HMS Eaglet – the shore base for Liverpool and was assigned to HMS Heather (K69). This was a corvette of the Flower class which escorted convoys across the Atlantic to Newfoundland as well as the Arctic convoys with the destination of Archangel.

Convoy JW54A sailed from Liverpool on November 15 1943 and was escorted part of the way by HMS Heather. On the return journey as convoy RA54B Heather joined the convoy on 27 November 1943 and was involved in the Battle of North Cape. My father never spoke of his experiences at sea but was saddened by the fact that the sacrifices of the many sailors who died went unrecognised.

In 1991 just after his death he received the 40 year commemoration medal from the Soviet authorities and I have just received the Arctic Star medal which I applied for in my mother’s name as soon as it was decided to award the medal to Arctic convoy veterans. Ironically it arrived the week after my mother died.