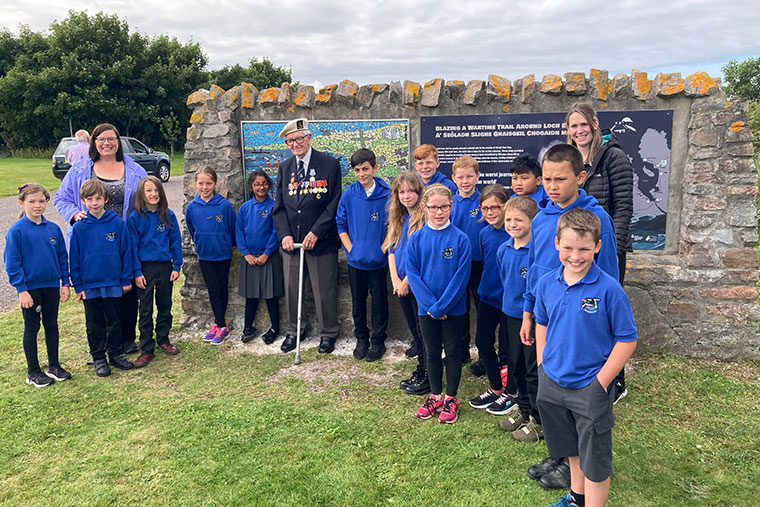 As the strategic gathering place for the Arctic Convoys between 1941 and 1945, remains of the area’s wartime activity are still visible around Loch Ewe. The new trail showcases four new bold and atmospheric silhouette public artworks, incorporated with viewpoint benches, new interpretation and mosaic panels created by local schoolchildren.

The trail marks important sites around Loch Ewe and shares the stories of how the local community and landscape was shaped by the war. The launch date of 31st August 2021 was important to mark the 80th anniversary of Operation Dervish, the arrival of the first of the Arctic Convoys of WWII which sailed from Liverpool on 12th August 1941 and arrived at Archangelsk on 31st August 1941.

The trail was opened by Arctic Convoy veteran David Craig and the pupils of Bualnaluib Primary School in Aultbea. Now aged 96, David is among the last surviving Convoy veterans and faced some of the most brutal conditions of the Convoy journeys including enemy attack, horrific weather conditions and freezing sea ice.

‘Blazing a Wartime Trail Around Loch Ewe’ is a Heritage Fund and Highland Council funded project.

Click here to visit the the Wartime Trail page
PrevPreviousThe Worst Journey In The World, The story of the Russian Arctic Convoys of WWII
NextChristmas Shopping and Open DayNext
We have been privileged to work with the Russian Arctic Convoys Museum Project and to support it every endeavour since it was launched. It is important both for Russia and the United Kingdom to preserve memories of this most heroic page of our War time Alliance as a tribute to the Veterans and for the sake of future generations.