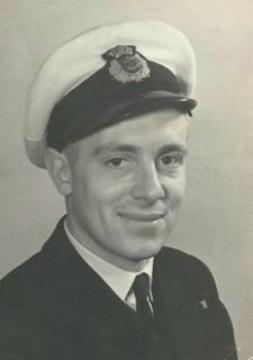 Layton Reid served in the Merchant Navy from 1938 to 1950. He served his apprenticeship with the Cairn Line of Steamships. In October 1940 he was aboard the SS Cairnglen en route from Montreal, via Leith, to the Tyne with provisions when in fog and owing to a navigational error she ran onto a reef close to Camel Island at Marsden.

Rough seas eventually lifted her and broke her back. Layton was among the crew rescued by Breeches Buoy and most of the much needed cargo was saved, including Canadian gammon. This incident is reported to have inspired Winston Churchill’s famous wartime Parliamentary address in which he called for everybody to pull together to save the country’s bacon.

A year later Layton went on to become Third Officer aboard the merchant vessel SS St Clears that sailed with convoy PQ 5 to Archangel in the autumn of 1941. His ship was frozen into port and did not return with convoy QP13 until June 1942. He was 20 when he left the UK and 21 on his return.

Layton, who began his Apprenticeship in 1938, would have been among the youngest Officers to serve in the Arctic Convoys at this time. It is remarkable to think that during this conflict such young men were in charge of night watches on a vessel laden with weapons, munitions and personnel whilst heading through icy waters towards hostile enemy action; character building in the extreme.

This journey is wonderfully recounted in Chapters 9 and 10 of Ivan Hall’s excellent book Christmas in Archangel. In the book Layton, as novice Third Officer, is given the nickname “Bluey” on account of his origins in Nova Scotia, Canada. Nova Scotians were commonly referred to as “Bluenosers”.

Layton was young to gain his Masters Certificate the day after his 26th birthday in 1947. In September that year he served as Second Officer aboard the M/V St Merriel which was the UK’s first post-war “Floating Exhibition Ship” entitled “Britain Can Make It”; designed primarily to promote British manufacturing. Together with the Third Officer, Layton contributed a humorous article about their photographic exploits aboard the St Merriel for the Saint Line’s in house magazine, The Reef Knot.

He continued to serve with the South American Saint Line as Chief Officer aboard the SS St Margaret and SS Sunray. In January 1950 he was discharged in St John, New Brunswick and returned to England to be with his wife Marjorie and two young sons, Robert and Philip.

After nearly three years in a menial administrative post at a hospital in Belper, England, the family emigrated in 1953 to his native Nova Scotia. Here, undoubtedly using his navigational skills Layton went on to carve out a highly successful career as a Land Surveyor for the Provincial Government; eventually becoming freelance. He contributed a learned article about magnetic declination for The Canadian Surveyor.

Sadly, Layton was killed in a car accident in 1956 when his vehicle skidded on black ice. This tragic incident brought forth the ironic observation that, “It was ice that may have saved his life, but it was ice that ended it”.

A further irony is that he was killed on the very shore of the Bedford Basin in Halifax. From here ships, like the SS Cairnglen, assembled in safe seclusion prior to the perilous Atlantic Convoys to the UK.

In spite of an eventful career, and, as with the more than 3,000 brave sailors lost during the Arctic Convoys, Layton’s was another life cut short.