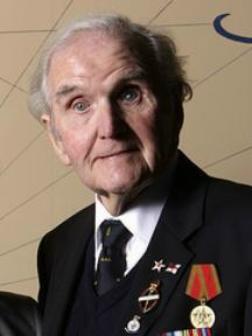 Information taken from an article by Argyll & The Isles written by Mike Rowlands.

A gunlayer, Jim served on eight return convoys to Russia, anti-submarine & enemy aircraft protection and was involved in the Normandy landings in June 1944.

HMS Achates, Jim’s first ship, was sunk in Russian convoy JW15B and Jim was one of the 80 survivors (out of 193 crew).

Jim passed away in April 2012. He was always an amazing supporter of the veterans of the convoys and he is seen pictured with his wife Audrey at Loch Ewe in 2008.

Jim and fellow convoy veteran Jack Harrison had the original idea for the museum at Loch Ewe and, without Jim &Jack, the museum project would not be where it is today.

Photo: Two of the RACP team, Nicky and Natasha, at the Victory Parade in Moscow on 9th May 2019. The placards show Jimmy McHugh and Jack Harrison