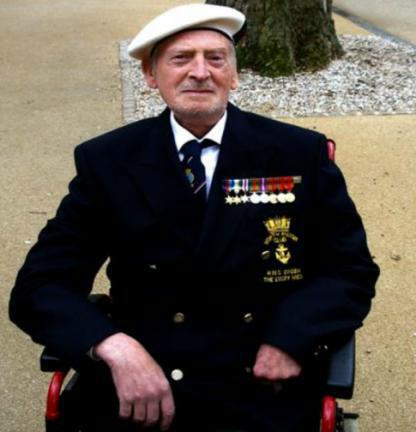 Jack Harrison was born in 1925 in Cleckheaton, North Yorkshire. He joined the Royal Navy in June 1943 aged eighteen.

His naval career commenced with basic training aboard HMS Glendower whilst she was located in North Wales, followed by radio operator training on the Isle of Man. On completion of this training, he transferred to Thurso via Portsmouth and joined the light cruiser HMS Diadem at Scapa Flow.

Over the next three years he took part in ten Russian convoy return trips to Murmansk, an eight week engagement during and after the Normandy D Day landings, flank protection in the Bay of Biscay and mine laying off the Norwegian coast. He was also involved in the last naval engagement of World War Two, a clash with German Z class destroyers.

Jack was eventually demobbed from HMS Collingwood in 1946.

In the late 1980s, Jack joined the North Russian Club and was an active member until it was disbanded in 2001 due to its ageing and declining membership.

An idea for an Arctic convoy museum

In 1998, Jack visited Loch Ewe (from where the convoys departed) with fellow member, Jimmy McHugh. This was a nostalgic, yet enlightening journey for them as they had only previously seen the area from aboard their respective ships during war time. They stayed at Pool House and, from conversations with the proprietor (who shared the same surname as Jack), discovered a common interest in the Russian convoys. The idea of a museum was hatched and subsequently developed by the owners of Pool House with assistance from Jack.

Jack became interested in a particularly heroic episode of the convoy period that affected the lives of five hundred Norwegian men, women and children.

They had fled their homes in Hammerfest ahead of retreating German troops who were being pursued by advancing Russian forces. After surviving in remote caves, the refugees were rescued by Royal Naval destroyers Zest, Zealous and Zambezi accompanied by Canadian destroyer RCN Sioux. They were taken to Murmansk where they were distributed amongst vessels of several nations for transportation to the UK.

Nineteen of the Norwegians, comprising eleven adults and eight children were put aboard Liberty ship USS Henry Bacon. Unfortunately, she developed rudder problems after setting out and fell behind the convoy. The ship was then attacked and badly damaged by German bombers. Radio messages were transmitted and the captain’s order was given to abandon ship, but only two of the four lifeboats were intact.

The nineteen Norwegians, with six young crew members to man the oars and radio operator Spud Campbell were placed in one lifeboat. The other serviceable lifeboat was packed with crew members, but could not carry them all. Thirty-eight members of the crew stayed behind and perished when the ship went down in the freezing sea. After the two lifeboats had been adrift for three hours, the aptly named British destroyer HMS Opportune appeared, responding to the radio distress signals. The occupants of both lifeboats were successfully transferred aboard and taken to safety in the UK.

Captain Neil Hulse MBE (Merchant Navy) was chairman of the North Russian Club until its disbandment. He presented Jack with the ship’s bell on the condition that he would seek a maritime location for it. Additional engraving was added to the bell in memory of USS Henry Bacon and, with convoy related documents, it was donated to Pool House, Loch Ewe for permanent display. The bell commemorates not only the Russian convoys that operated from this location, but the aerial protection provided by the Royal Air Force and Fleet Air Arm. It is a permanent reminder of the courage, endurance and sacrifice of those who served in demanding and dangerous conditions.