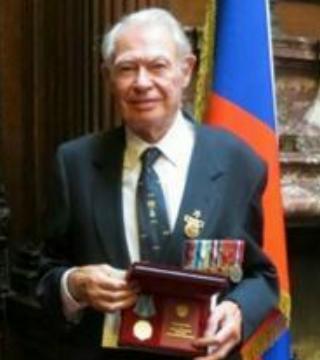 Photo: Ned Ruffle with his shipmate Ken Watson. They served together on HMS Vindex. Ken has his own page on this website.

Working as a clerk for The Steel Scaffolding Company, I had a desire for something more exciting and wanted to join the merchant navy. After a very heated debate with a friend on the merits of Merchant Navy vs Royal Navy, we decided to join up and made our way to the recruitment centre in Acton the very next day.

I volunteered for the Royal Navy as a boy seaman (aged 17) in December 1943. I was “called to serve” on 29th December, 1943 and went to HMS Collingwood in Fareham Hampshire. There was 6 to 8 weeks training as a seaman before being transferred to Stockheath Camp in Havant, waiting to be drafted to a ship.

Around this time and particularly in this area you could see the preparation for the 2nd Front. I recall one day, they cleared the lower deck and asked for volunteers for landing craft to support the 2nd Front by taking one step forward. Being young and new recruits everyone stepped forward! The next instruction was “One step forward all those men on Jankers (punishment)” Why were so many on Jankers? I recall it was a Sunday and I was Duty Watch 2nd of Port, thus confined to camp. The others were told that no one was to go more than 10 miles from the camp. Being young matelots no notice was taken of the orders and everyone headed to Havant station taking trains to: London, Portsmouth, Southampton…..

Generally, when the lads had a night out and coming back late, they never went through the main gate but instead found a way to climb over a fence to get back into camp. On this occasion as they were climbing back in many got caught. The following day, all of them got 10 days stoppage of leave together with 10 days stoppage of pay. They also became the volunteers for landing craft duties to support the 2nd Front!

From Stockheath Camp I recall a pal of mine (Ryder), being despatched to take an old destroyer over for the 2nd Front, in order to sink it to form a harbour. When Ryder returned, the only possessions he had was what he stood up in. He lost his total kit hammock. I never met him again.

Shortly, afterwards I was drafted to Greenock in Scotland to join the escort carrier HMS Vindex. She was a converted merchant ship of the Nairana-class escort carriers, launched in May 1943 and commissioned on 3rd December 1943. This was a happy ship, with great shipmates and as a boy seaman I was paid 5 shillings a fortnight (that’s 25 pence in today’s money). We conducted a few flying trials for our Swordfish aircraft around Ailsa Craig. We then had gunnery practise in Scapa Flow, where we shot at flying socks which were being towed by aircraft. I remember taking cargo off a lighter and seeing RUSSIA marked on a box; I said to a shipmate “seems we will be heading for Russia, I thought our destination was supposed to be secret”.

We soon joined our first convoy to Russia JW59. We went into the Kola Inlet and dropped anchor in Venga Bay watching over the merchant ships going into Murmansk to discharge their cargo. This convoy had 34 merchant ships and was also supported by the battleship Archangelsk (formerly HMS Royal Sovereign) and 12 Russian PT boats. I recall, probably it was in November 1944 we were anchored in Greenock. I was “cook of the mess” on that occasion. I cleared up the mess after breakfast and went on deck to put the gash down the shute. I then saw the Queen Mary drifting towards us! She, bow first hit HMS Vindex damaging the aft port pompom and the cat walk. Fortunately, there was not too much damage to us. In total I served on 8 convoys: JW59, JW61, JW63, JW66, RA59A, RA61, RA63, RA66.

A few things I remember on some of these convoys:

RA63: on this the convoy had to take shelter in the Faroes to escape such severe gales.

RA66: the German U-boats were waiting for us on our way out of the Kola Inlet (29th April 1945) but our destroyer and frigates went into action blasting them out of the water to ensure the convoy got through safely. However, HMS Goodall (Captain-class frigate) was torpedoed, her sister ship HMS Honeysuckle went alongside to take off survivors. We took the 30 survivors home on HMS Vindex. We arrived back into Scapa Flow on May 8th 1945, the day the war ended in Europe.

After the Artic Convoys and a spot of leave we left Greenock for Belfast in August 1945. We took on board American aircraft to support the war in the Far East. The aircraft filled the hanger and the flight deck. We arrived in Sydney the day the atom bomb was dropped in Hiroshima. We then moved to Brisbane to take on stores bound for Hong Kong. In Hong Kong we took on board Australian POWs, many of them suffering from Beriberi. These men had cut up motor tyres fastened to their feet as their only footwear. On the way back to Sydney we pulled into Manus Island to give the POWs a run ashore. I will never forget as we sailed under Sydney Harbour Bridge with all the Australian POWs on the flight deck, each had tears in their eyes. All the ships in the harbour were sounding victory blasts on their sirens. This was followed by a tikka tape tour of Sydney.

The next trip from Honk Kong to Sydney was to return civilian POWs to freedom. Our “skipper” allocated some of the ships company to look after them. A few of them appeared to try and take advantage of this and when they wanted something would snap their fingers and say to the allocated sailors “Boy do this, do that”. Naturally, this did not go down to well with the lads. Our skipper took this in hand and directly addressed the civilian POWs and told them straight “You are not on a P&O Liner! Talk to my men nicely or they will be taken away”.

Christmas 1946 we took Australian servicemen domiciled in Tasmania to Hobart for their Christmas leave. Also aboard was the Governor of Tasmania Sir Hugh Binney and his wife. We then went onto Kury in Japan, where I and some of my shipmates went aboard a Japanese tug boat that took us ashore. We walked the ruins of Hiroshima. Returning home we called into: Celyon (now Shi Lanka), Mauritius, Durban and Simonstown (South Africa) before coming into port in Plymouth. Our journey ended when we docked in Rosyth.

Ned originally submitted this story as a pdf, which was illustrated with several photographs. To view Ned’s photos, the original pdf can be downloaded here. The document was forwarded to us by Rosemary Lever.