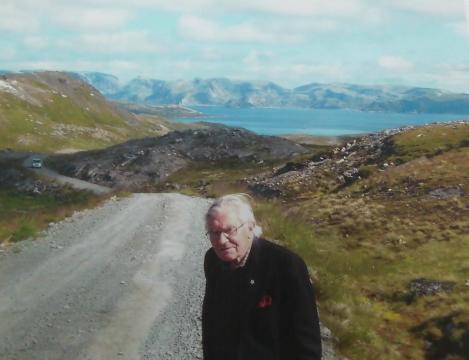 R. M. E Carter served aboard HMS Zealous and was one of the men who volunteered to help ferry the Norweigian’s from shore to ship on 19th February 1945 at Soroy Island.

The photo shows a letter written by R. M. E. Carter about the occasion. The text is as follows:

Dear Sir, until recently I was unaware that there was any association of Russian Convoy veterans, or that there was (is) a Museum at Loch Ewe. I was one of the men who volunteered to help ferry the Norwegians from shore to ship (in my case “HMS Zealous”) on Feb 19th 1945 at Soroy Island. I recently returned to Soroy and took with me a number of press cuttings of the rescue. One picture, (March 19th 1945 Daily Express) depicted a little 2 yr old girl being rescued. Sophie Pedersen (now 70 and back living on the Island), came to see me at the Hasvic Hotel. I just thought someone might be interested. Yours Sincerely. R. M. E. Carter.