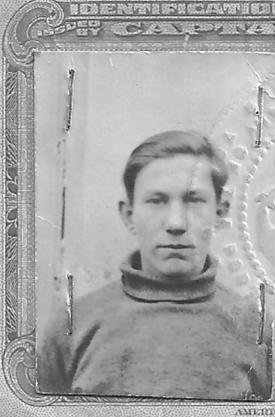 My wife recently obtained an article from your website concerning Jack Humble’s story of his experience on Convoy JW57 to Russia. I was also on that Convoy but on a tanker, the Daphnella, of the Anglo Saxon Petroleum Company. We had been to New York from Liverpool where we were fitted-out (for the run to Russia) then we loaded a full cargo of pure grain alcohol in Baltimore.

They gave us string vests, a sheepskin waistcoat, a warm fur-collar coat, etc. On the way back to the UK we broke down in mid-Atlantic due to the white metal shoes on the thrust block of the propeller shaft melting, which I think was put down to sabotage whilst we were in New York. Sand in the lube oil? We were hove to for several hours in very bad weather, but got home ok on our own.

We left Loch Ewe on the 20th February 1944, and set off with the Convoy. Fortunately we didn’t suffer the same fate as HMS Mahratta thanks to all those Navy ships that protected us and the extreme weather conditions which discouraged the German aircraft in Norway taking off.

From what I can remember of the night the Mahratta was torpedoed, several of us, (I was then a just-18-year-old Deck Apprentice) were standing in the alleyway outside the ‘Sparks’ room listening to the distress calls and description of what was happening on his radio, just listening was frightening enough! I can’t imagine the horror that Jack experienced. We knew the convoy was under attack by U-boats and had no idea how close they may have got. We too were aware of the time one might survive in the icy water, there’s no doubt that Jack is a very tough guy! We figured that if we got hit, with our cargo we’d more likely go up than down!!

As Jack says, it was indeed very cold and a very rough sea for most of the way.

We ended up, I think there were 6 ships that went down the White Sea, we had two icebreakers, the Stalin and the Lenin, mostly manned by some very tough and strong-looking Russian women! We discharged at Molotovsk where we used to hitch a lift on horse drawn sleighs up to the Intourist Club which had sacks of black bread on, which felt as hard as bricks when we sat on them. Due to some mishaps, the pipe line we were discharging on broke, and the alcohol melted the ice which was about 3 feet thick!

Happily we had an easier trip home in April, but it was a very cold and very rough experience. I’ve nothing but admiration for those small Navy ships that protected us, many of them escorted several of the Convoys, we only went once and I can assure you that was more than enough!

I really am pleased that people like Jack are telling of their experiences and he really does give people a chance to know what it was really like to be on a ship that was sunk, and there were many – too many.