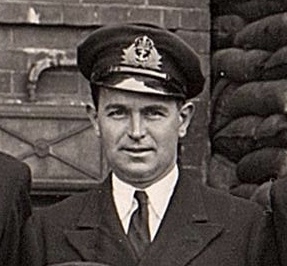 Sources of information: Naval Service Records, Rod’s Diary for the Year 1942 (PQ17,QP14 Convoys) and the Memoirs of his Wife Margaret (Peggy).

Rod was born in St Helens Lancashire, he was a keen sportsman from a young age and took part in rugby, cricket and athletics for the Cowley School in St Helens.

After school he started his career in journalism first with the St Helens Reporter then with the St Anne’s Express, here he had to telephone copy to the head office in Blackpool, the copytaker on the switchboard was to become his wife Peggy, she liked the sound of his voice! By the time the war started they had moved to Crewe, Rod was general manager on the Crewe Guardian. Head cook and bottle washer as my Mum called him.

Rod was called up to the Royal Navy in April 1941. Initial seamanship training at HMS Ganges was followed by a spell at Guildford Technical College, at that time a Navy training centre for wireless / telegraphy and radar. Then on to HMS Valkrie on the Isle of Man for more radar technology training.

In April 1942 he was drafted to the Empire Tide a DEMS / CAM ship (Defensively Equipped) (Catapult Armed) merchant ship, in Newport Wales at the time, for wireless and radar work. The catapult was there to launch an adapted Hurricane aircraft (Hurricat). Launching it could be problematic, retrieving the pilot who, on return, had to ditch in the sea could be even more so.

Rod kept a diary for the year 1942 in it he describes daily life before, during and after the notorious PQ 17 convoy to Russia. A journey described by Winston Churchill as “ The worst journey in the world”. The convoy assembled at Loch Ewe on the 27th of May, they then moved on to Hvalfjord, Iceland. Problems with the radar were still being resolved. Rod was elected as entertainments secretary for the Cam Club, boredom was a problem at times, I think they would have settled for boredom had they known what was to come.

The convoy departed on the 27th of June with a considerable fanfare, Lt Douglas Fairbanks of the US Navy and well-known actor came aboard before they set off with an escort destroyer playing “Who’s afraid of the big bad wolf” over the p.a. system. The weather quickly turned cold as they reached the Arctic Circle with fog a particular hazard. Fog along with snow would also be described as their best friend later on during attacks by the Luftwaffe.

The action started during the first week of July, the Convoy was being shadowed by a German Blohm & Voss reconnaissance seaplane, later joined by a Heinkel 115 torpedo bomber seaplane, a terrific barrage ensued, the B&V shadows stuck around directing in more Heinkel 115s and 111s, (a medium bomber), on Saturday the 4th Rod witnessed 4 ships hit with 3 sunk. The convoy scattered on orders from London, the Empire Tide’s gunner “Titch” was hit, 2 planes were brought down. Some day!

The scatter order with the withdrawal of the Navy escort was later described as one of the biggest Naval disasters of the second world war.

The attacks continued on Sunday, Rod noted: on our own, JU88s around, (another type of bomber) several ships attacked, a busy day plotting, Fog our Godsend.

Monday sighted Novaya Zemlya (NZ), a very sparsely populated island off the North Russian coast and several other ships, Rod noted that these ships sheltered along with the Empire Tide for a few days but were later sunk in the White Sea. The Empire Tide had decided not to join them and put into Matochkin Shar (MKS) on NZ island, still around 750 miles from their destination Archangel.

Local Russians came aboard with much ceremony and two days later, a doctor to see the injured gunner Titch. There is an account of Titch’s earlier treatment on board the Empire Tide on: naval-history.netby Horace Carswell the chief steward.

Over the course of the next week ships came and went, two RAF Catalina seaplanes came in, Titch was taken away, tobacco was issued, thirty one survivors arrived from two US ships and rations were halved.

It would be another week before they departed from M.K.S by then they had accumulated another 200 survivors and 3 Corvettes. They set off with an escort and “lovely fog all night”. On Friday 24th of July they reached the White Sea. As they neared their destination Rod wrote “breathed a sigh of relief cut short by action stations”. They went through miles of timber docks and eventually docked in Archangel at midnight.

Rod was not overly impressed by Archangel and even less so by Molotovsk, just up the coast, which was unfortunate for him as they were not to depart until the 13th of September! Time was filled by the usual watches, trips into town to the shops (mostly shut) and the cinema (showing ‘Second Fiddle’ with Sonja Henie), work on the ships temperamental wireless and radar equipment, trying to find out about friends on other ships, going to church in Bakaritsa, sorting out pay (bad) and receiving NAAFI rations (good) and more games of monopoly.

Rod’s duties as entertainments secretary came to the fore with numerous games of football, hockey, cricket, and deck tennis organised against other ships crews. The opposition included Bramble, Leda, Hazard and Pozarica.

Mosquitos were a constant irritation, particularly to Rod when he was umpiring a cricket match, I wonder if the batsmen thought they were being given out when Rod was wafting away the insects, it must have been a baffling sight to the local Russians.

They left Archangel for Molotovsk on 24th of August, under action stations as Archangel came under attacks which continued for the next week. Rod heard the gunfire and saw the flames from Molotovsk. The crew had plenty of time on their hands for a while and not much to do, equipment had to be maintained, otherwise it was letter writing and model making projects, serviette rings, an ashtray and even polishing up a wooden cigarette box bartered for cigarettes with a prisoner. I still have the box and the wooden model destroyer made for 4-year-old David.

Finally, on Sunday 13th of September it was time to set off for home, departure was delayed until late in the afternoon due to gale force winds and high seas. Aircraft were sighted on the Wednesday, some friendly some not, snow and fog were again the convoys friend. On the Thursday they were joined by the carrier Avenger with its private fleet (Rods description) an escort of 32 Navy ships.

Now near to Bear Island on the Saturday a merchant ship blew up and sank. The next week off Jan Meyan island a further 3 ships were lost. The end of that week saw heavy weather, Rod wrote “terrific seas and gales blowing us home, going hard for Scotland”. The coast was sighted early am on Sunday the 26th of September and they arrived back at Loch Ewe around 3.00 pm.

Rods comment was “It seems years since we were last here, it was actually 4 months ago”.

I am obviously extremely grateful that my Dad survived PQ17 when so many others did not, I would not be here otherwise. Of the initial 35 merchant ships only 11 reached their destination. The reasons for the disaster have been well documented, hopefully lessons were learnt.

With Rods training in Naval Radar and his newly gained operational experience, he was then sent to HMS Mercury, the Naval Signals School at Leydene House in Hampshire for further training. He was then lent out to ports around the UK to fit radar into ships and the RN base at Grimsby.

Having reached the rank of Temporary Lieutenant Rod was released to shore on the 9th of May 1946.

After the war Rod along with Peggy and David went back to the newspaper in Crewe, also to Crewe & Nantwich Rugby Club, I have his leaving tankard from the members in appreciation of his services from 1936 to 1949. Now with Janet, they moved to Birmingham.

Rod was a sports reporter for the Birmingham Post & Mail. In the winter it was West Midlands football mostly Villa, Blues and Albion with a bit of Wolves and Walsall, some rugby and boxing. In summer it was cricket and his favourite sport of golf. He covered all kinds of local sport too and later became sports editor for the paper.

As for the merchant ship Empire Tide it was built as a CAM ship at Lithgows Ltd, Glasgow in 1941.

It was owned by the Ministry of War until 1945. Post war the ship was known as THIRLBY, GURI and ANTO as it carried out general cargo duties for its various owners in England and Panama. It was finally scrapped in Ikeda, Japan in 1966.

I was 13 when Dad died in 1967 so I have no personal recollections from him about the war years, so finding the 1942 diary and obtaining his service records along with my Mothers memoirs, has made it possible to put his story together for the RACP – Convoys Remembered page and what a fascinating insight it has been for me and hopefully for you too.