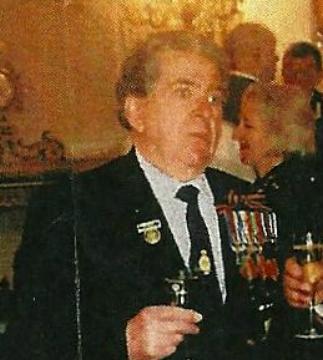 “Many thanks for your letter and contents received today, some of which struck a strong chord in my early life in the Royal Navy; it is a long story, I left home and was sent to HMS Collingwood, Portsmouth, where I did my training, my shoulder was tapped and turning I saw this officer who said “We know you are under age, you can go home or stay.” I replied I am staying, whereupon he patted me on the shoulder and said volunteers like you are worth “Ten Pressed Men”. Hence, I was in the Royal Navy.

My first ship being HMS Berwick, a cruiser on the Russian and Arctic Convoys; it was a very hard and daunting life for me but I soon grew up and survived a tough life.

I have enclosed a couple of prints you may like to publish; I also know very very well Ken Watson, Ned Ruffle and Jimmy Baynes, we are in the same Legion.

I was invited to the Russian Embassy earlier this year to receive the Ushakov Medal which will be proudly worn on the 11.11.14 along with my medals plus the four Russian ones, as you can see, the photo shows me [centre with medals] in conversation with the Russian Ambassador a Gentleman I must say.”

“I did the Arctic Convoys, 1942/43, winter time. They said at the time it was the coldest winter that they had known for years; we certainly never had the warm clothing that they have today but we survived, so very many didn’t.

To tell you the truth, my mother thought that I was going for a new job for instead of putting on my overalls for work, I put on my so-called weekend clothes which were then very basic, to go and join the Royal Navy; finest choice I ever made.

I saw the sea, which up till then I had never seen. I was soon going to see and hear more than I had ever bargained for, and all for a uniform, a tot of rum and about three shillings a day (15p), but life for me changed.

For someone who had only seen the River Thames my eyes would see more water than I would ever imagine, but when my ship, HMS Berwick, got hit, I was eventually got sent out to join the Far Eastern Fleet for to take out the Japs in Hong Kong – pretty scary. So, just a very short episode of a matelot’s life.